PM Modi calls on global firms to invest in India

PM Modi told the audience that in his childhood he had “sold tea on a platform” and had lived in poverty. 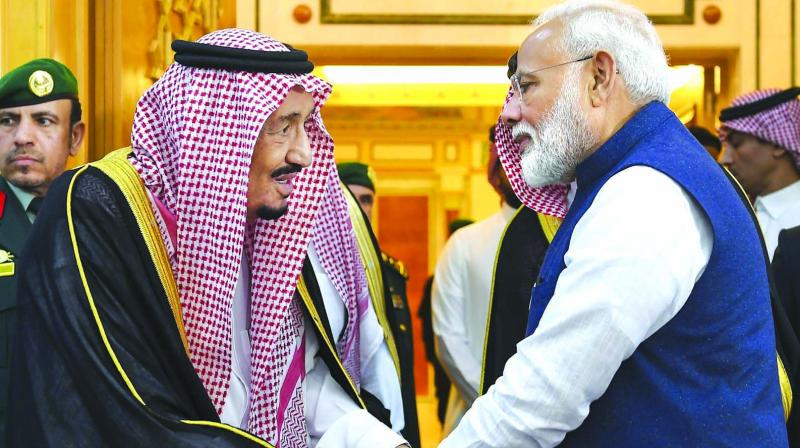 New Delhi/Riyadh: Prime Minister Narendra Modi on Tuesday called on global investors to benefit from India’s vibrant start-up ecosystem that, he said, stands as the third-largest in the world, adding that he firmly believes that any investment in India’s innovation sector would yield huge returns.

While delivering the keynote address at the high-profile financial summit, Future Investment Initiative (FII), dubbed “Davos in the desert”, Mr Modi said, “India is the third-largest start-up ecosystem in the world. Even in Tier-II and Tier-III cities of India, start-ups have come up. Our start-ups have started investing at a global scale. I invite global investors to benefit from our start-up ecosystem. I firmly believe that any investment in innovation would give highest returns.” While highlighting India’s start-up environment, the scope for infrastructure development, sophisticate technology and the government’s bid to promote skills and ease procedures, Mr Modi said that India had risen in the ease of living and ease of doing business, and added that there was “no illusion in policy” and “no doubt in the goal” on the part of his government.

Citing five emerging trends impacting global business across the world — impact of technology and innovation, importance of infrastructure for the global growth, rapid changes in human resources and future of work, compassion for the environment, and business-friendly governance, the Prime Minister said that the aim of FII is not only to discuss the economic system but also to understand the rising trends of the world and look for ways aimed at global welfare.

Reiterating his government’s commitment to make India a $5 trillion economy by 2024, Mr Modi said that as many as 400 million people in India would be trained in different skill in the coming three-four years under the Skill India initiative. “This will provide assured skilled manpower to companies investing in India,” he said.

Hailing Saudi Crown Prince Mohammed bin Salman as his “brother and friend”, Mr Modi praised the Saudi Aramco company for its decision to invest in the West Coast Oil Refinery in India, which he said will be “Asia’s biggest oil refinery” and added that India aims to invest $100 billion in refining, pipelines and gas terminals by 2024.

PM Modi told the audience that in his childhood he had “sold tea on a platform” and had lived in poverty. He spoke about the initiatives of his government, like building toilets, which he said, had given dignity to the lives of the poor.

Before his meeting with the Saudi King, top ministers of the Gulf nation called on Mr Modi and discussed ways to further deepen bilateral ties in areas of energy, labour, agriculture and water technologies.

In his speech at FII, PM Modi also pressed for the reform of the United Nations while expressing regret over some countries using the global body as a “tool” rather than an “institution” to resolve conflicts.

“We have to think whether the UN has risen to the occasion when it comes to conflict resolution. I had raised this issue when the UN turned 70 but much discussion could not happen. I hope this topic is discussed more actively when the UN turns 75,” PM Modi was quoted as saying. “Some used the UN as a tool and not as an institution. While some do not abide by the law, some are trapped under the burden of law. The world has to abide by law. Earlier expansionist tendencies determined strength. Today development oriented polity, the quest for innovation is determining what strength is,” he added.

Referring to the Saudi King at the conference, he said that he had been told by King Salman himself that he (the Saudi King) had been taught during his childhood by an Indian teacher and that is why he loved India and Indians. PM Modi then pointed out how India’s “human capital” had influenced the Saudi monarchy.

Saudi Arabia’s energy minister Prince Abdulaziz bin Salman, minister of labour and social development Ahmad bin Sulaiman Alrajhi and environment, water and agriculture minister Abdulrahman bin Abdulmohsen Al-Fadley were among the ministers who called on Prime Minister Modi in the Saudi capital on Tuesday. The Saudi energy minister had a productive meeting with the Prime Minister and the two “talked about efforts to improve energy cooperation between the two nations,” the Prime Minister’s office tweeted.

The meeting assumes significance as the two countries have decided to move ahead on the ambitious west coast refinery project in Raigarh in Maharastra which will involve investments from Saudi oil giant Aramco, UAE’s Abu Dhabi National Oil Company and Indian public sector oil firms.

India, the world’s third-largest oil consumer, imports 83 per cent of its oil needs. Saudi Arabia is its second-biggest supplier after Iraq. It sold 40.33 million tonnes of crude oil to India in 2018-19 fiscal, when the country had imported 207.3 million tonnes of oil.

India, the 6th largest economy in the world and the 3rd largest energy consumer after the US and China, buys some 200,000 tonnes of LPG every month from Saudi Arabia.

Saudi Arabia last month said that it was looking at investing $100 billion in India in areas of energy, refining, petrochemicals, infrastructure, agriculture, minerals and mining.