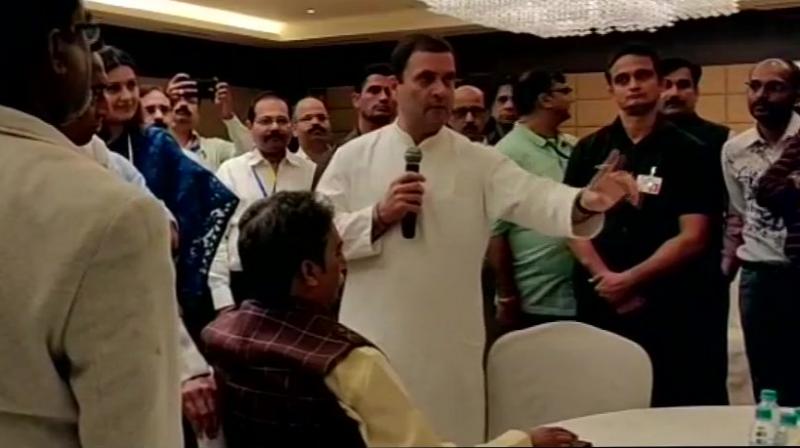 Shivraj Singh Chouhan accused Rahul of making 'patently false allegations' against him, said he will file defamation suit against him. (Photo: Twitter | ANI)

Mumbai: A day after Madhya Pradesh Chief Minister Shivraj Singh Chouhan threatened Rahul Gandhi with a defamation suit for allegedly mentioning him and his family in corruption cases, the Congress chief backtracked on some of his statements saying he got “confused” due to multiple scams in the BJP.

“There is so much corruption in BJP-ruled states that I got confused yesterday. Madhya Pradesh chief minister was not involved in Panama scam. He is involved in the e-tendering and Vyapam scam," Rahul said on Tuesday clarifying on his earlier remark that he made at an election rally in poll-bound Madhya Pradesh on Monday.

Without taking Chouhan’s name, Rahul had said yesterday, “Udhar Chowkidar, Idhar Mamaji. Mamaji ke jo bte hai, Panama Papers me unka naam nikalta hai. (On one side, you have the watchman (apparently referring to PM Modi), on the other side you have 'mamaji'. The name of the son of 'mamaji' figured in Panama Papers)".

Later, Shivraj Singh Chouhan accused Rahul of making “patently false allegations” against him and said that he will file a defamation suit against him.

“This is an objectionable statement given with a criminal intention,” Kartikey’s lawyer S Srivastava said.

With assembly polls round the corner in Madhya Pradesh, political parties have upped their campaigning. The state will go to polls on November 28.

Congress is leaving no stone unturned to ensure BJP’s defeat while the ruling party is aiming to continue its hold on a state where it has been in power for 15 years.