Congress also criticised Modi for 'not even making a mention' of the incident in 'Mann-ki-Baat' and called him 'insensitive'. 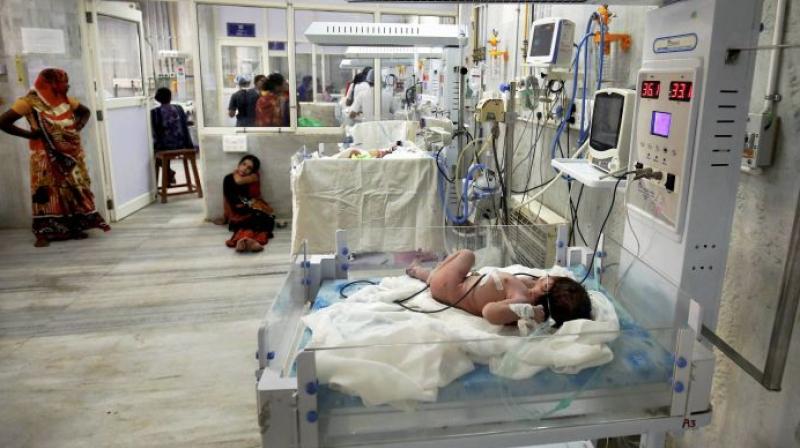 The Congress on Sunday also demanded a court-monitored probe into the deaths of babies at the Ahmedabad civil hospital. (Photo: PTI)

New Delhi: The Congress has demanded Gujarat Chief Minister Vijay Rupani's resignation over the deaths of 20 infants in three days at a civil hospital, and said Prime Minister Narendra Modi and BJP president Amit Shah should be held accountable for infant deaths across the country.

The party on Sunday also demanded a court-monitored probe into the deaths of babies at the Ahmedabad civil hospital.

Congress leader Jaiveer Shergill criticised Modi for "not even making a mention" of the incident in his monthly radio address 'Mann-ki-Baat', and accused him of being "insensitive" to the pain of the families of the deceased.

He dubbed the Prime Minister's radio address as "yet another disappointing monologue", which was not in sync with the ground reality and current issues facing the country.

"Does the Prime Minister not feel the pain of the deaths of these infants in his heart or does he not have any sympathy for the families of the victims?

"Instead of (expressing his) 'Mann ki Baat', the prime minister should have apologised to the people of this country, especially the families of the innocent infants, who lost their lives due to gross criminal negligence of the BJP-run administration," Shergill said in a statement.

The deaths of the infants were not an "unfortunate incident" but "cold-blooded murders" by the state administration.

"The Congress demands that Gujarat Chief Minister Vijay Rupani immediately resign from the post on account of the deaths," he said.

He said Modi and Shah "should be held accountable and answerable for the frequent deaths of infants" all over India, especially in Gujarat, Uttar Pradesh and Rajasthan.

"The Congress demands that Modi, rather than indulging in PR exercises, should start addressing the real issues of the economy and do something to put an end to the dance of death going on in various BJP-ruled states," he said.

The Congress leader alleged that the BJP in order to satiate its political appetite has turned government hospitals and doctors into "political handles for its political gains".

Shergill also alleged that an "operation cover-up" has started in Gujarat to protect the accused involved in the "horrific" incident by authorising the deputy superintendent of the civil hospital to conduct an inquiry.

"How can the accused be a judge in his own case? This is nothing but an eyewash to protect the accused," he said.