About 80 Congress workers were arrested on Monday while holding a public meeting ahead of their protest march. 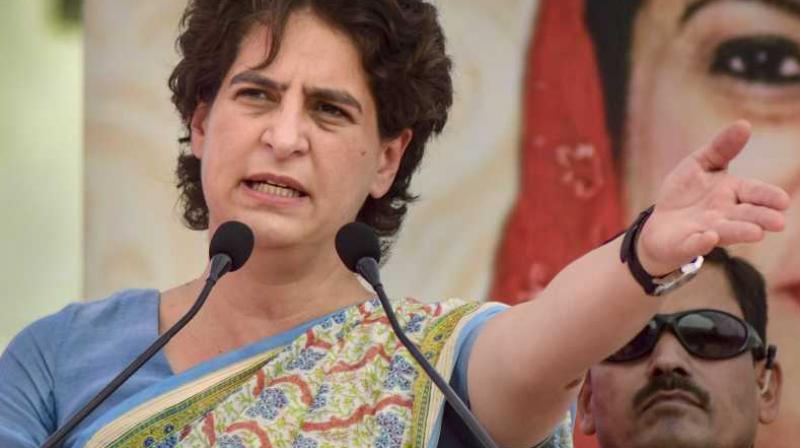 'The UP BJP government wants to suppress the voice seeking justice for the daughter of Shahjahanpur. The padyatra is being stopped. Our workers and leaders are being arrested. What is there to be afraid of?,' she wrote. (Photo: File | PTI)

New Delhi: Congress leader Priyanka Gandhi Vadra slammed the Uttar Pradesh government on Monday for allegedly blocking a party march in support of the student who has accused former Union minister Chinmayanand of rape, saying the BJP dispensation was destroying democracy in its “arrogance of power“.

About 80 Congress workers were arrested on Monday while holding a public meeting ahead of the march they had planned in support of the student.

Accusing the Uttar Pradesh police of blocking the march, the Congress said its leaders, including former Union minister Jitin Prasada, were detained. The borders of Shahjahanpur district were blocked from all sides, the opposition party said on its official Twitter handle.

Congress leaders have planned a 180-km march in support of the student from Shahjahanpur to Lucknow.

“In the arrogance of power, the BJP government is destroying democracy. It can go to any extent to save a rape accused and suppress the voice of the daughter of Shahjahanpur,” Gandhi said.

In a tweet in Hindi, she described the Bharatiya Janata Party-led regime in Uttar Pradesh as a nervous government.

“As soon as they get to know that there is going to be a demonstration against them, they impose (section) 144 (of the CrPC),” the Congress general secretary in-charge of eastern Uttar Pradesh said. The voice of the people cannot be suppressed, injustice and tyranny cannot be hidden. The more they try, louder will be the demand for justice. Give justice to the girl from Shahjahanpur. Stop saving your minister,” she wrote on twitter.

Earlier, she had alleged that criminals in Uttar Pradesh had the protection of the government so that they could intimidate the rape survivor.

“The UP BJP government wants to suppress the voice seeking justice for the daughter of Shahjahanpur. The padyatra is being stopped. Our workers and leaders are being arrested. What is there to be afraid of?,” she wrote.

The student was arrested on Wednesday on charges of extortion and sent to judicial custody for 14 days. Hours later, her bail plea was rejected.

Chinmayanand, sent to judicial custody after his arrest, has been booked under section 376C (intercourse by superintendent of jail, remand home etc.) of the Indian Penal Code (IPC), a charge with a lesser punishment than in case of rape.