A robust infrastructure is being built up fast by China in western Tibet, but work on Indian side is disappointingly slow, pilgrims said. 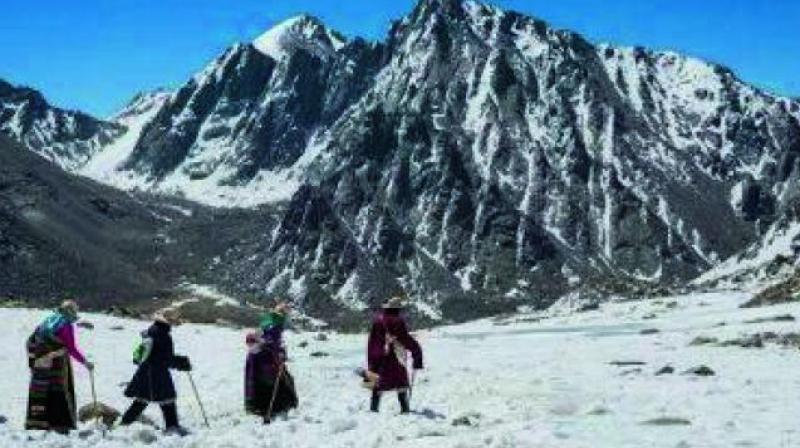 Kailash Mansarovar pilgrims said they have returned home impressed with the infrastructure coming up on the Tibetan side of the India-China border beyond the Lipulekh pass. (Representational image)

Pithoragarh: Kailash Mansarovar pilgrims said they have returned home impressed with the infrastructure coming up on the Tibetan side of the India-China border beyond the Lipulekh pass.

While a robust infrastructure is being built up fast by China across the border in western Tibet, the work on the Indian side is disappointingly slow, pilgrims returning from the recently concluded yatra told PTI.

Sudhir Verma, a resident of Nainital district, who was part of the 16th batch of the yatra this year, said the Indian roads may be still 75 km away from the pass whereas the Chinese have already reached around 500 metre.

The three motor roads being constructed to link the last Indian border post along the India-China border are progressing at a disappointingly slow pace, he said.

According to Dharchula Sub Divisional Magistrate RK Pandey, work on Sobla-Sela-Tedang motor road in Darma valley of Pithoragarh is stuck at Pangbawey locality due to huge leaning rocks, while the construction of Ghatiabagar-Lipulekh road is going on at a snail's pace at Nazang for the last one year.

The 61 km motor road, aimed at linking the last security post along the India-China border in Johar valley of Munsiyari sub division has been constructed only up to 18 km till date in 10 years, Munsiyari SDM KN Goswami said.

According to Sudhir Verma and his wife Sunita Verma, who travelled to Kailash Mansarovar this year, the Chinese would reach the border post by the end of this year as they were working with high pace.

"During our short stay in Tibet, we witnessed that Chinese labourers start work at 8 am sharp and go on at constant pace to achieve their target,"  Sudhir said.

Dharmendra Upadhaya, another pilgrim from India, said the Chinese have constructed a  four-lane road up to Taklakot on way to Lipulekh, but we have not even repaired our trek route yet.

"Had the trek route been cleared up to Gunji , we would have preferred to undertake the yatra through that," Upadhaya said.

Pithoragarh District Magistrate C Ravishankar said,"The civil administration has been assured by the Border Roads Organisation (BRO)  that the road under construction at Vyas valley will be completed by 2020."

Dinesh Gururani, an employee of Kumaon Mandal Vikas Nigam, said when he used to dispatch batches of pilgrims from the last Indian camp at Nabhidhang some 30 years ago, the Indian pilgrims used to travel more than 10 km to reach vehicles in China.

"However, today the Chinese have constructed their road close to the Lipulekh pass. If any Chinese trader comes to India, as they are supposed to do under the India-China border trade, they will have to travel over 75 km to reach the first Indian motor road," Gururani said.

Sanjeev Kumar, a liaison officer for the 15th batch of the yatra, told PTI that the Chinese have not only constructed a four-lane road up to last border post at Lipulekh pass from their side, but also constructed a network of roads on nearby mountains of Taklakot to tackle natural disasters."

The under-construction 75 km Ghatiabagar to Lipulekh motor road, on the last station of Tanakpur to Tawaghat road, that will link the last Indian border post with the rest of the country was proposed in the year 1998 but its construction began in 2007.

The road that was to be completed in the year 2013 is still under construction and getting delayed due to slow pace of work and weather conditions, the Dharchula SDM said.

However, some Indian officials are hopeful about completion of the roads in a few years.

"Being situated in Tibetan plateau, the Chinese are in an advantage as far as road construction on Mansarovar route is concerned whereas the Indian side is full of rocky and steep terrains which make road building difficult.

"Despite challenges posed by rocky terrain, the construction of a road ahead of Nabhidhang has been completed already and hard rocks are being cut near Nazang and Malpa," said Roshan Lal Sharma, an IPS officer and a liaison officer for the 9th batch of the yatra.