India   All India  30 Sep 2018  Apple executive shot dead by UP cops for not stopping car
India, All India

Apple executive shot dead by UP cops for not stopping car

The post-mortem confirmed that he died due to bullet injury in the head. He is survived by his wife and two daughters. 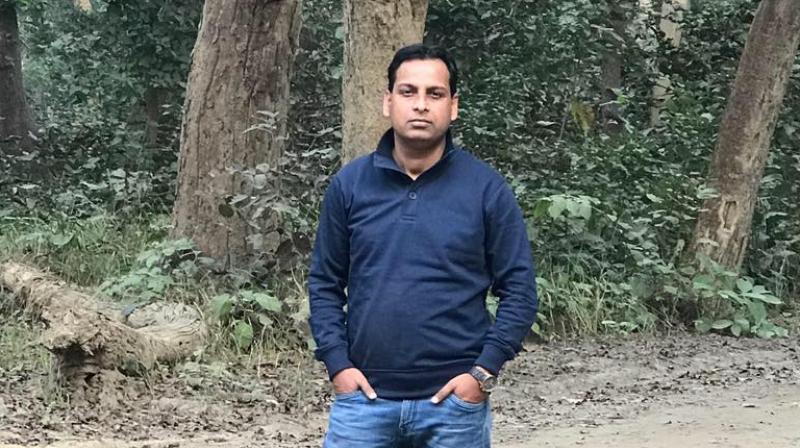 Police said Vivek Tiwari, who was in his car with his former colleague Sana Khan, on seeing police tried to flee and rammed his car against a wall. (Photo: Facebook Screengrab | vivek.tiwari)

Lucknow: Apple India's area manager Vivek Tiwari was shot dead by two police constables in the posh Gomti Nagar area of Lucknow late on Friday night when he did not stop for a routine check.

The incident took place around at 1.30 am when Tiwari, 38, was returning home with a colleague, Sana Khan, after the launch of iPhone X Plus in the state capital.

According to one of the accused cops, they signalled Tiwari to stop his car for a routine check but he tried to speed away and rammed into the policeman's motorbike parked nearby and then hit a pillar. He claimed that the deceased also tried to mow him down after which he opened fire in self-defence.

However, Sana Khan, who was in the car, told reporters, "Sir (Vivek Tiwari) did not stop the car because the area is completely deserted at night. The cops fired at him from the front." Ms Khan said that she suddenly heard a gunshot, following which the car rammed into a wall.

The bullet hit Tiwari in the neck and got embedded in his head. He was rushed to Lohia Hospital, where he succumbed to injuries.

The post-mortem confirmed that he died due to bullet injury in the head. He is survived by his wife and two daughters.

The two constables involved in the incident, Prashant Chaudhary and Sandeep Kumar, have been arrested and sent to jail while proceedings for their termination have also begun.

Union Home Minister Rajnath Singh spoke with Uttar Pradesh chief minister Yogi Adityanath and asked him to take effective action. The home minister represents Lucknow in the Lok Sabha. Mr Adityanath, who was in Gorakhpur on Saturday, said that the incident was not an encounter and he was ready to recommend a CBI inquiry into in.

DGP O.P. Singh said that the initial probe suggests that the cops "acted wrongly" and went beyond the limits of "self-defence".

SSP Lucknow Kalanidhi Naithani said that an SIT team has been constituted to investigate the case.

Meanwhile, the Tiwari family has refused to cremate Vivek's body until chief minister Yogi Adityanath gives them an assurance.

The wife of the deceased has sought a compensation of Rs 1 crore and a job for herself.

"My husband had called me around 1:30 am and told me he will come home after dropping his colleague as there was a launch party of a new phone. The police are now questioning my husband's character," Kalpana, wife of the deceased, said.

A Congress delegation reached the home of the deceased and party spokesman Anshu Awasthi said, "We demand strict action against the culprits and chief minister Yogi Adityanath should step forward and apologize to the family and the people of the state and accept the failure of his police."

Samajwadi Party spokesman Anurag Bhadauria said that "The state police and the government have failed in their duty. This is a case of cold blooded murder and the chief minister cannot escape his responsibility".