India   All India  30 Sep 2017  These families in Jodhpur mourn on Dussehra
India, All India

These families in Jodhpur mourn on Dussehra

The priest explained that there was some resistance from the majority Hindus to their attempts to build a temple in the honour of the demon king. 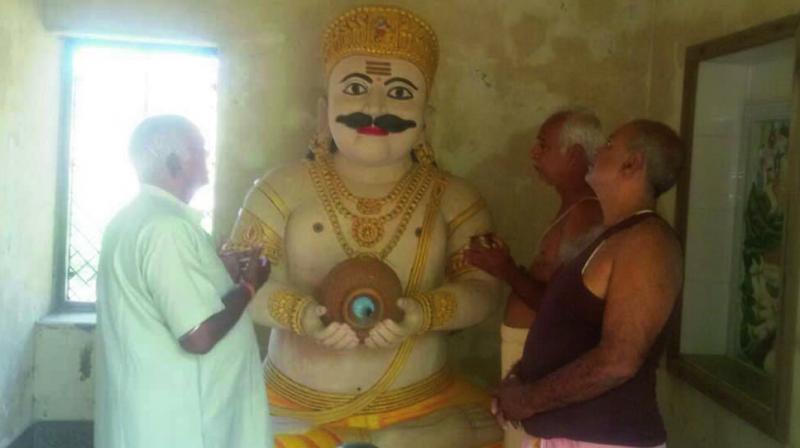 Prayers being offered at a temple dedicated to demon king Ravana.

Jaipur: As a majority of Hindu devotees celebrate Dussehra to mark Lord Rama’s victory over demon king Ravana, a tiny Brahmin community, based in Jodhpur in Rajasthan, will mourn on that day. The community reveres the demon king and has built a temple in his honour to carry on the tradition rooted in the belief that they are descendants of Ravana, a great scholar and devotee of Lord Shiva.

On Dussehra day when effigies of the demon king are burnt by other Hindu devotees as part of the festivities, the 60-odd families belonging to the Dave Godha and Mudgal gotra of the Shrimali Brahmin community in Jodhpur shut themselves up in homes. “We do not go and watch burning of Ravana’s effigy,” said Kamlesh Dave who is the priest of the Ravana temple built in Mahadev Amarnath and Navgrah temple premises in Chandpol area on a road leading to Mehrangarh Fort.

“We wait till the effigies are completely burnt. We all take a bath, put on fresh clothes and assemble in the temple and offer special prayers to him,” said Mr Dave, who is also a practising lawyer. The community members claim to be descendants of Ravana and remember him as a “man of great culture and erudition”, he said.

About 60 families of the community are based in Phalodi, a small town near Jodhpur. Some other families are settled in Gujarat's Jamnagar, Bhuj and Kutch areas. Explaining Ravana’s Jodhpur connection, Mr Dave said that it is believed that Ravana’s wife Mandodari hailed from Mandore, which was the ancient capital of Jodhpur state. According to him after Ravana’s capital Lanka was devastated in the war with Lord Rama, many of the descendents of the demon king travelled to Mandore.

Later when Maharaja Jodha built the new capital Jodhpur, these people migrated to the Rahmapuri region, he said. The priest explained that there was some resistance from the majority Hindus to their attempts to build a temple in the honour of the demon king. In 2008, when we built the temple there were some protests but people later understood our point of view.

“We worship Ravana for his virtues. Barring the abduction of Sita, one cannot find a single blot on his character and that is why he was praised by all the sages and gods as a glorious king of his times,” Mr Dave said.