The RSS chief also slammed violence in the name of cow vigilantism. 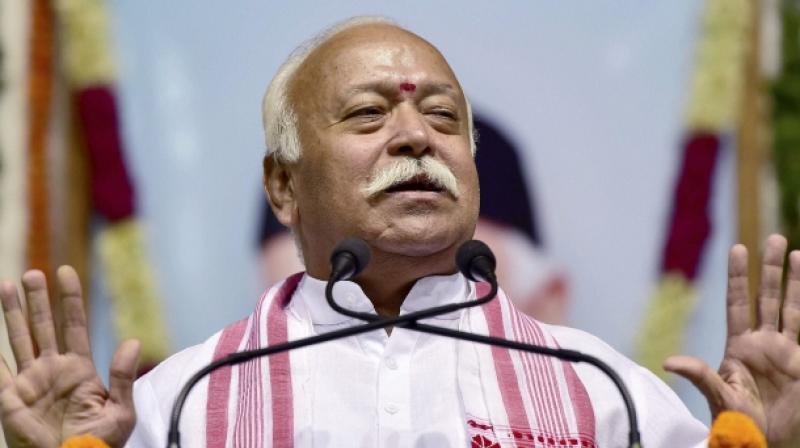 Bhagwat further went on to add that the country has already been facing problem of illegal Bangladeshi migrants and now Rohingyas have infiltrated into India as well. (Photo: PTI/File)

Speaking at the RSS traditional annual Dussehra rally in Nagpur Bhagwat said, "If we give shelter to Rohingyas, they will not only put pressure on our jobs, but also pose a threat to national security."

The RSS Chief also said that Rohingyas have Jihadi links. He added, “Rohingyas have links with Jihad and that is why the government of the other country is acting strict against them."

He further went on to add that the country has already been facing problem of illegal Bangladeshi migrants and now Rohingyas have infiltrated into India as well.

Bhagwat said, "We had not even completely solved problem of Bangladeshi intrusion when problem of Myanmar has been heaped on us."

The RSS Chief also hit out at the governments of West Bengal and Kerala, who he said are "lending a helping hand to the anti-national forces for petty political interests".

State Govts of Kerala & Bengal seem 2 b lending a helping hand to the anti-national forces for petty political interests. #RSSVijayaDashami

The RSS chief also slammed violence in the name of cow vigilantism.

He said, "It is reprehensible that some people have been killed allegedly by gaurakshaks. In fact violence of any form is."

Bhagwat said rearing of cow is not a matter of religion. He said, "I know many Muslims are involved in rearing and protection of cows."

He added, "We must look at issue of cow protection beyond religion. Many Muslims have sacrificed their life in gauraksha - protection of the cow just as people of Bajrang Dal have."

The RSS Chief also strongly justified the economic polices of the Narendra Modi government and said they made sincere efforts for the welfare of common but also cautioned that there should be a system in place to gather the feed back from all sources about its execution and impact of scheme on the society.

While reforming and cleaning the economic system, some tremors and instability is expected, said RSS chief Mohan Bhagwat.

The RSS Chief also praised the government's handling of Doklam issue with China.

Bharat’s determined stand has been visible in incidents like Doklam on borders as well as in international diplomacy.#RSSVijayaDashami

Addressing the Blue Whale game issue, Bhagwat said, "To save our innocent kids from vicious circles, family, society and government will have to take the effective steps."

He said, "Falling prey to games like Blue Whale show how unsafe our children are in the age of internet media."

Bhagwat also expressed his condolences to victims of families of Elphinstone Road railway foot overbridge stampede. The RSS Chief said, "Deeply saddened by incident which occurred yesterday. My condolences to families of those who lost their lives."