Officials said a special drive for detection of tunnels was launched along the int'l border in the wake of cross-border shelling by Pak. 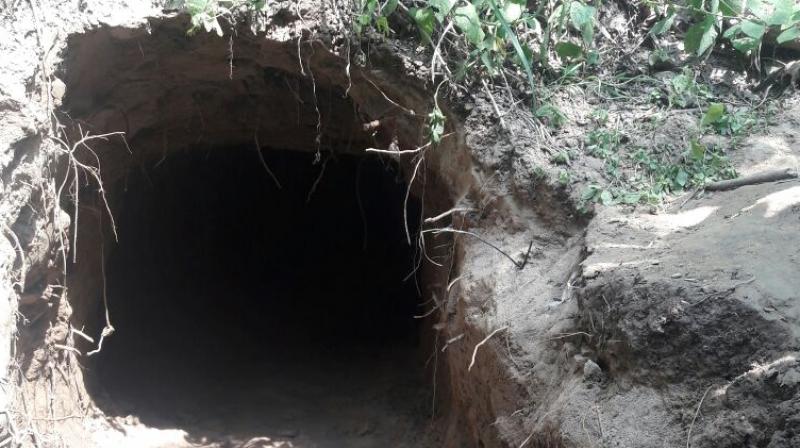 The tunnel was 14-feet long when it was detected by the alert troops. (Photo: ANI)

Jammu: The Border Security Force (BSF) on Saturday unearthed a 14-feet-long tunnel near the zero line in Arnia sector here which was being dug from the Pakistani side, scuttling a major infiltration bid and a possible terror attack, officials said.

Inspector General of the BSF Ram Awtar said an area domination party noticed the suspicious movement of nearly a dozen armed people near the zero line who fled after seeing the uniformed men.

"The unfinished tunnel, dug from the Pakistani side, approximately having three-feet height and two-and-a-half feet width on the slope of bank at Dhamalla nulla (stream) ahead of border fence was detected by the alert BSF jawans this morning," he told reporters here.

The BSF patrolling party commander got suspicious and launched a thorough search and survey operation of the area which led to the detection of the tunnel and recovery of "war-like stores". 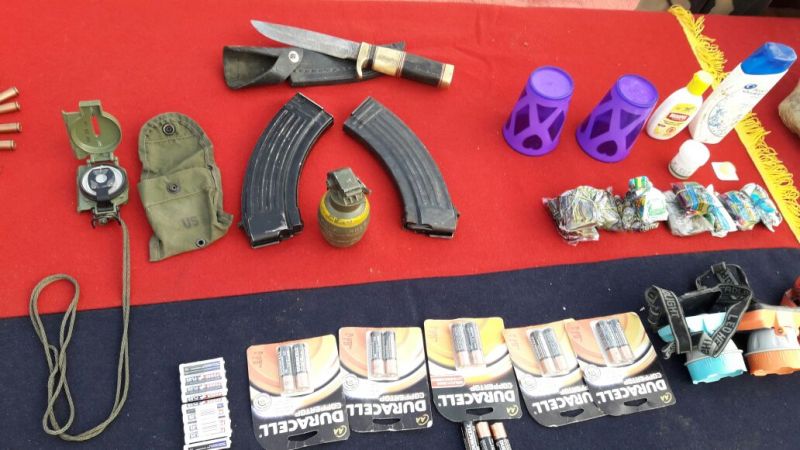 Among the items recovered from the location included a US-made compass, two magazines, 60 rounds of ammunition, a hand grenade,and other items and most of these items were carrying the marking of Pakistan, he said.

Terming the tunnelling activity as a "nefarious act" of Pakistan, the officer said timely action by the BSF foiled a major attack on the Indian soil.

Sector commanders of the BSF and the Pakistan Rangers held a flag meeting in Suchetgarh sector along the international border yesterday at the request of Pakistan to defuse the tension in the wake of intense cross-border skirmishes this month.

"The flag meeting happened yesterday and several issues came up for discussion. The BSF has not lowered its guard but had remained alert, knowing the history of Pakistan which on the face value does something else but behind it are upto something else," he said, adding it is because of the "alertness" of the force that the tunnel was detected.

He said the recovery of huge cache of Pakistan-made food items are indicative that there was an attempt to complete the tunnel before its detection and carry out a major strike on the Indian soil.

In response to another question after a brief video clip of the tunnel was played during the press conference, Awtar said the entry to the tunnel is in Pakistan and its dead-end is just between fencing and the zero line, around 10-metres towards Pakistan.

He said the Pakistani Rangers might be aware of the digging of the tunnel because nothing escapes the eyes of the BSF long the international border.

"It is presumed that any civilian activity without the knowledge of the Pakistani Rangers is not possible," the IG BSF said.

He said the length of the zero line and fencing is around 14-metres but the recovery of various items, including digging tools, indicated that services of experts were utilised.

"Simple digging tools were not recovered and the selection of the area was also where there is short distance. The services of experts in tunnel digging were utilised so that anyone with half-bent can move easily through the tunnel," he said.

He said the BSF is fully alert to meet any challenge along the international border to foil the "nefarious designs" of Pakistan.

"The whole border is surveyed and mapped and we know the such suspicious areas which are kept under constant observation," Awtar said.

He said the BSF party after taking all risk think jungle area having number of blind mortar bombs fired from Pakistan (during the recent cross-border shelling) reached close to the area to know the nefarious design.

The BSF officer said this was the second tunnel unearthed since February and fourth in the past one year.

Earlier, a tunnel was detected on February 13 in Ramgarh sector.

"The digging tools, fresh dug earth and length of tunnel indicated that the tunnelling has started very recently about three days back, with an intent to infiltrate strong group of terrorists. Once again the intent of the Pakistani Rangers to push in anti-national elements has been exposed," Awtar said.

The IG BSF said the force foiled at least four tunnelling activities along the international border over the past one year.