India   All India  30 Sep 2017  Fight issues that are threat to nation: President Kovind on Dussehra
India, All India

Fight issues that are threat to nation: President Kovind on Dussehra

Prime Minister Narendra Modi said that celebrating festivals is like a union of knowledge and learning in India. 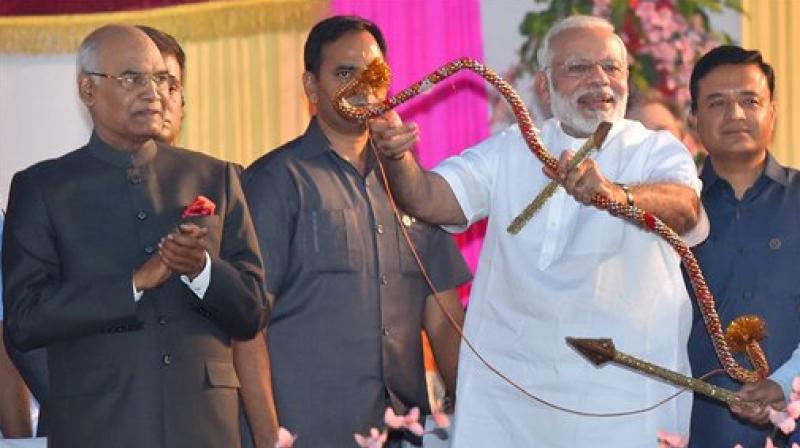 New Delhi: On the occasion Dussehra on Saturday, President Ram Nath Kovind asked all the citizens to come together and fight against issues like corruption, poverty, illiteracy and terrorism, which are a threat to the society.

Addressing the crowd at Madhav Das Park near Red Fort Ground, President Kovind said the ideals of Lord Rama will only be successful if we follow them in our lives as well.

"The ideal life of Lord Rama is highly relevant to humanity today, but it will only be successful when we follow his ideals in real life as well," President Kovind said.

The President asserted that one can learn a lot from Ramayan.

"We have so much to learn, one of which is that no work or person is big or small, and if we do all our work with dedication, honesty, and all our might, also thinking that this will help in the development of the country then I understand that every work will work as a way of progress in this nation," he said.

Prime Minister Narendra Modi, who was also present on the special occasion, said that celebrating festivals is like a union of knowledge and learning in India.

He also said that India is a nation where through festivals like Dussehra, people should be made aware of important issues that prevail our society.

"Such celebrations should not only be a cause for entertainment, but a determination to do something. Let us promise to ourselves that in 2022, when India will complete its 75 years of Independence, we make a contribution to our nation as a citizen of this country," Prime Minister Modi declared.

The Prime Minister also witnessed the burning of effigies of Ravan, Kumbhakarn and Meghnad during the event.