The defence minister said the government wanted to understand the conditions the soldiers live in. 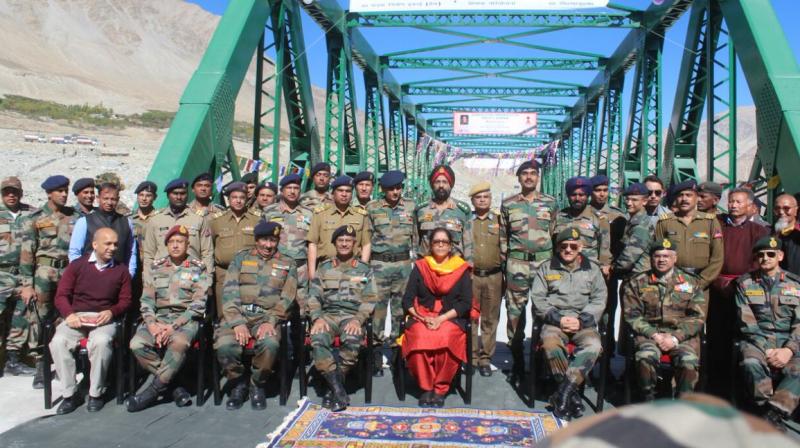 Addressing the officers and personnel of the Border Roads Organisation (BRO), the Defence Minister, who is on a two-day visit to Jammu and Kashmir, said the construction of bridges and roads at such high-altitude terrain was nothing short of a miracle.

"Jawans from different states, which have varied weather conditions, come and serve the nation in such high-altitudes and it is applaudable," Sitharaman said.

The state-of-the-art bridge is a major development on the Shyok Gong River which will enhance travel of locals as well as the Army in this strategic region. It will increase travel and communication for strategic transport, the minister said.

She said Prime Minister Narendra Modi and the central government fully supported the soldiers who protect the nation under all circumstances.

"We are committed to spending time with the jawans and do whatever is possible for them," she said.

Recalling the Prime Minister's visit to Siachen where he spent time with soldiers, she said the government wanted to understand the conditions the soldiers live in.

"I assure you that the government is with you all the time and in all circumstances. We are not only sensitive to your needs and demands but also to those of your families," the minister said.

While lauding the BRO and its men for working in a difficult terrain and hostile circumstances, Sitharaman said the organisation not only connected people of remote hamlets, but also provided connectivity for the Army in strategic locations.

She said constructing roads and bridges in difficult terrains would help in development and progress of the nation and its people.