Army called in to rescue people in flood-hit MP district 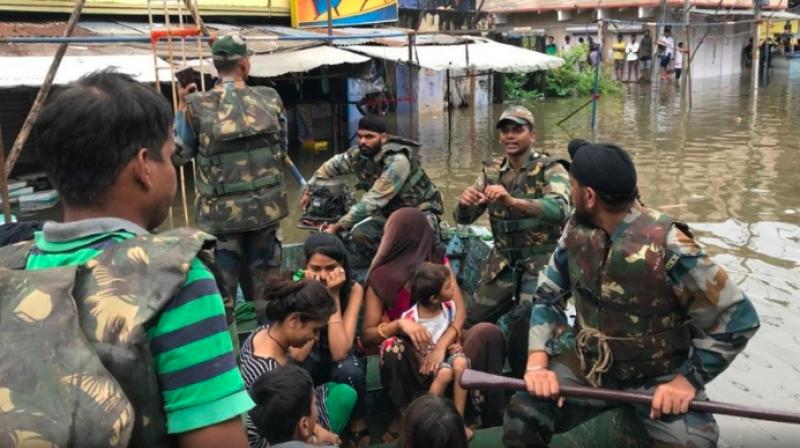 Army has been called in to rescue people in the marooned areas in Madhya Pradesh’s Hosangabad district following flash floods. (Representative Image)

Bhopal: Army has been called in to rescue people in the marooned areas in Madhya Pradesh’s Hosangabad district following flash floods in Narmada caused by heavy downpour in the region in the last 24 hours.

The river was flowing 9 ft above its danger level in the district.

“Army has been called in to evacuate the people in marooned areas in the district. Besides, National Disaster Response Force (NDRF) teams have already been pressed into service to rescue the people in flood-hit areas”, Hosangabad divisional commissioner Rajnish Srivastav said.

Chief minister Shivraj Singh Chouhan made an aerial survey of Hosangabad to assess the flood situation in the area.

Road communications at several places in the state have been cut off due to flash floods in various rivers in the state triggered by torrential rains in the last 36 hours.

Road communications between Bhopal and Sagar and Narasinghpur and Chhindwara have been cut off as flooded Narmada breached bridges and national highways at several places in the region.

Eight of 12 major dams in the state have reached their full reservoir level following heavy rains in the last 36 hours.

The hill resort of Pachmarhi in Madhya Pradesh has received 228 mm in the last 24 hours whereas Hosangabad has received 208.8 mm during the period.