Victim Shahrukhan Khan and his 3 friends were allegedly trying to steal a buffalo when villagers spotted and gheraoed them. 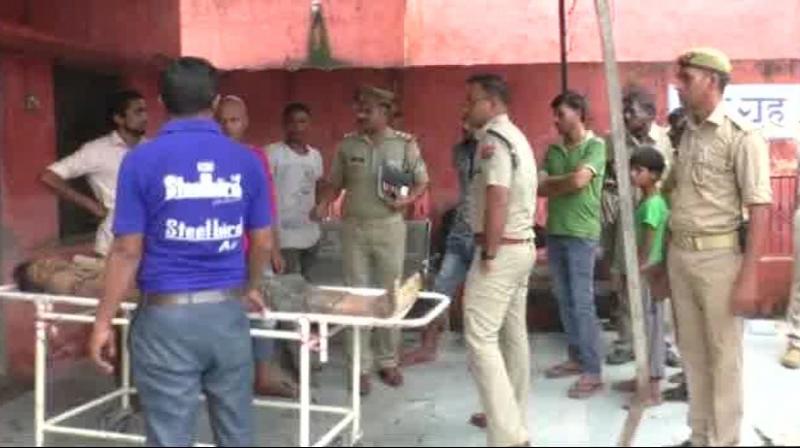 Victim Shahrukh Khan was alive when the police rescued him and was rushed to the hospital. However, he died during treatment. (Photo: Twitter | ANI)

Bareilly: A Muslim man in his early 20s was allegedly beaten to death by a group of 50 villagers, who suspected him to be a cattle thief. The incident was reported from Bholapur Hindoliya village in Bareilly district in the early hours of Wednesday.

According to police, they received a call from villagers who handed over the victim, Shahrukh Khan to them. He was alive when the police rescued him and was rushed to the hospital. However, he died during treatment.

Khan got a call from his friends and he went to meet them. When he didn't return home, his family got worried, but they thought he would come back by morning, said brother of the victim.

However, in the morning they received a call from the police who told them that Khan was admitted to a hospital.

Bareilly Superintendent of Police (city) Abhinandan Singh said, "Shahrukh Khan and his three aides, Majid, Pappu and one unidentified person, were in the process of stealing a buffalo from the house of a local farmer named Gajendra Pal around 3 am on Wednesday. However, the farmer spotted them and raised an alarm. Within minutes, a crowd of nearly 50 villagers gathered there. While his aides managed to flee, Khan was caught and was severely thrashed for several hours.”

“We rescued him around 6 am and rushed him to hospital, where he later died. Based on a complaint by the farmer and the deceased’s brother, a case has been registered against Khan’s accomplices and 30 unidentified villagers,” the SP (city) added.

Meanwhile, farmer Gajendra Pal said he tried to pacify the mob but they did not listen to him. “I didn’t want anyone to be hurt,” he added.

Post-mortem report said that Shahrukh Khan died of internal injuries to his liver and kidneys.

According to reports, Khan was a tailor by profession and he returned from Dubai in July this year. He used to work at his maternal uncle’s shop in Dubai.

Khan was the youngest among his seven siblings.

“Around 10 pm on Tuesday, he insisted on going to our aunt’s house in the neighbouring village. However, our parents refused to let him step out at that hour as it was not safe. After sometime, his friends arrived and he stepped out with them. He promised us that he won’t go too far,” The Times of India quoted Khan’s brother Wasim saying.