The episode featuring Mr Modi was shot at the Jim Corbett National Park in Uttarakhand. 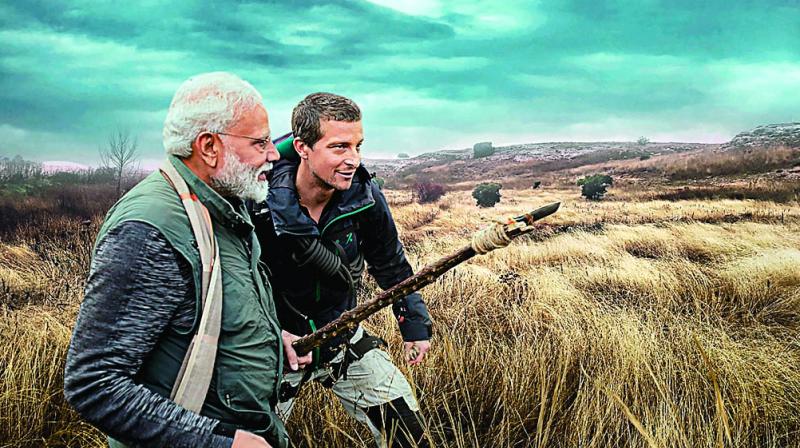 New Delhi: Prime Minister Mr Narendra Modi’s survival show — Man vs Wild with Discovery channel is set to hit the television screen on August 12. It may be recalled that the shoot had become controversial during the terror atack at Pulwama. On Monday, the Prime Minister also released the All India Tiger Estimation Report 2018 and said the country has emerged as of one of the biggest and safest habitats for tigers in the world. With the government data showing a 33 per cent rise in the number of big cats in the country from  2,226 in 2014 to 2,967 in 2018.

‘People across 180 countries will get to see the unknown side of PM @narendramodi as he ventures into Indian wilderness to create awareness about animal conservation & environmental change. Catch Man Vs Wild with PM Modi @DiscoveryIN on August 12 @ 9 pm. #PMModionDiscovery,’ tweeted renowned survivalist, adventurer and host of the show Bear Grylls.   The episode will premiere simultaneously on 12 Discovery channels in India on August 12 at 9:00 p.m. The premiere
will also be available in 5 languages and will be showcased in more than 180 countries around the world.

The episode featuring Mr Modi was shot at the Jim Corbett National Park in Uttarakhand. A release from channel adds that the episode will throw light on wildlife conservation and highlight issues related to environmental change.

Meanwhile, the Prime Minister on Monday released the latest government data showing a 33 per cent rise in the number of big cats in the country as per the All India Tiger Estimation Report 2018 which stated that tiger population in the country has increased from 2,226 in 2014 to 2,967 in 2018.

‘I want to tell the people associated with it that the story which started with Ek Tha Tiger and reached Tiger Zinda Hai should not stop there. This will not work. The work towards tiger conservation has to be expanded and sped up,’ Mr Modi said.

On the ‘development versus environment conservation’ debate, Mr Modi said striking a balance between the two is possible. With around 3,000 tigers, India has emerged as of one of the biggest and safest habitats for them in the world, Mr Modi said as he lauded all the stakeholders involved in the country’s tiger conservation exercise.

‘Nine long years ago, it was decided in St. Petersburg (Russia) that the target of doubling the tiger population would be 2022. We in India completed this target four years in advance. This is the finest example of Sankalp se Siddhi (attainment through resolve),’ he said.