Union Parliamentary Affairs Minister Pralhad Joshi said that the matter should not be 'politicised'. 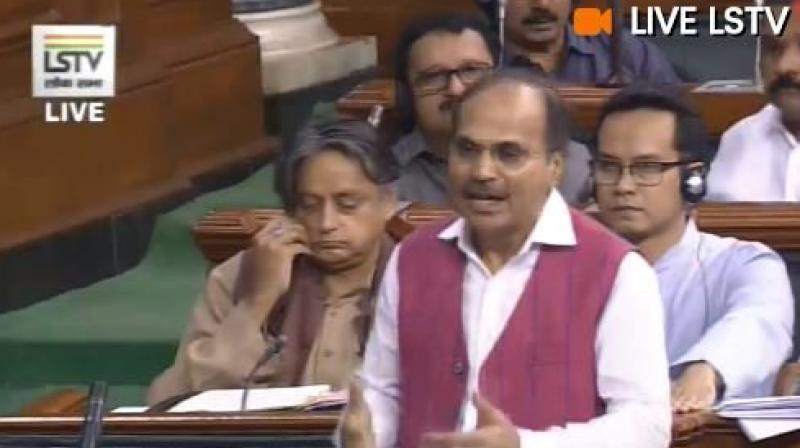 Chowdhury said: 'We demand that the Home Minister should come to the House and give a statement. What kind of a society are we talking about, where such an incident can happen.' (Photo: ANI)

New Delhi: On Tuesday, the car accident of the Unnao rape survivor created an uproar in the Parliament as the Opposition parties cornered the ruling BJP. The opposition questioned why there has been no action on its rape accused member Kuldeep Sengar. They have demanded an impartial probe into the matter and explanation from the Home Minister Amit Shah.

Addressing the Lok Sabha, Congress’s Adhir Chowdhury said: “The people of India are feeling ashamed today due to Unnao incident. It is a blot on civilised society, where a minor girl was gangraped. We demand that the Home Minister should come to the House and give a statement. What kind of a society are we talking about, where such an incident can happen.”

Union Parliamentary Affairs Minister Pralhad Joshi said that the matter should not be “politicised”. He said that a CBI inquiry is already underway and an FIR has been registered.

On Monday, the opposition leaders targeted the government on the issue.

Why do we give people like Kuldeep Sengar the strength and protection of political power and abandon their victims to battle for their lives alone?

This FIR clearly states that the family was threatened and apprehensive. It even mentions the possibility of a planned accident.

West Bengal Chief Minister Mamata Banerjee said, “This is very unfortunate. I don’t know what’s going on in the country. The BJP demands a CBI or Enforcement Directorate probe into everything. Then why can't it do the same for whatever's happening in Uttar Pradesh?”

A new special education bulletin for Indian women. Don’t ask questions if a BJP MLA is accused of having raped you.https://t.co/8ObmmFBl0L

The survivor’s family has alleged that Sengar and his men were behind the accident. The survivor and her lawyer have been injured and are in a critical condition. Two of her aunts, one of whom was a witness in the case, succumbed to their injuries. The family also alleged that they were threatened by Sengar and demanded that they should drop the case.