In a govt-funded shelter home in Bihar’s Muzaffarpur, 29 out of 44 girls were raped over past few months. 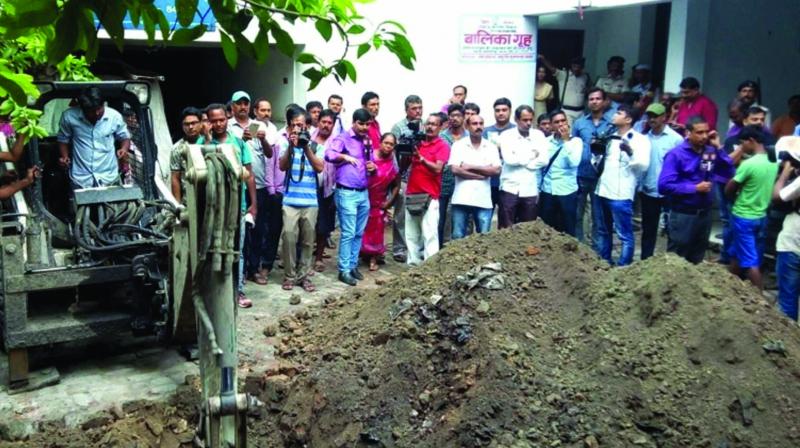 Police dig at the site where a rape victim was alleged buried at a government shelter home in Bihar’s Muzaffarpur.

Patna: Good governance  is considered to be the biggest USP of Bihar chief minister Nitish Kumar. Analysts say that it was due to his image as “Sushasan Babu”  that he was selected to lead the NDA in Bihar after pulling out from the grand secular alliance in 2017 and is being seen as a face for 2020 Assembly elections. However, rapes of minor girls at a government-funded shelter home in Muzaffarpur have tarnished the image of the chief minister who is facing Opposition’s heat over rising crimes against women.

The Muzaffarpur shelter home incident in which 29 out of 44 girls were sexually assaulted has not only raised a question mark on the law and order scenario in the state but also made Nitish Kumar’s detractors invoke fear of the return of “jungle raj” .

The public outrage over the shelter home horror had forced the chief minister on the backfoot and forced him to minimise political damage by recommending a CBI. As the central probe agency started its investigation,  Opposition parties claimed that the state government cannot wash its hands off as the shelter home was funded by the social welfare department of the  government.

According to a statement issued by the chief minister’s office, “The state government is committed for a fair probe into the heinous incident which has occurred in Muzaffarpur shelter home. To end confusion on the issue chief minister Nitish Kumar has asked the DGP and principal home secretary to hand over the case to the CBI with immediate effect.”

Muzaffarpur incident is, perhaps, the first case in the state where brutal mass rape of girls between 7 to 17 years took place under one roof. Sources say almost all the victims who were living in the state government’s shelter home being run by NGO Sewa Sankalp evam Vikas Samiti were either rescued from the human trafficking net or separated from their homes.

The matter had surfaced in March when Mumbai-based Tata Institute of Social Sciences (TISS) found sexual assault victims in Muzaffarpur shelter homes. An audit report was submitted to the social welfare department by the institute following which authorities registered an FIR and rescued the girls.

RJD leader Tejashwi Yadav, who led a nine-member delegation of Opposition leaders of Congress, HAM(S) and CPI(ML) to Muzaffarpur shelter home,  raised questions on the investigation and demanded the resignation of chief minister Nitish Kumar.

“Nitish Kumar should take moral responsibility of the sexual assault at a state-run shelter home and resign as he also holds the home portfolio. The state government has failed as a crime against women in Bihar has increased in last one year,”  said Tejashwi Yada, who has given a new slogan “NDA bhagao, beti Bachao” .

The Opposition parties have blamed the ruling party for shielding people involved in the shelter home case. In one of his statements earlier, Tejashwi Yadav had charged chief minister of having a close association with Brajesh Thakur who is the administrator of the NGO which ran the shelter home.

Mr Thakur, the main accused in the case, was  arrested last month along with 10 other  employees of the shelter home.

“A CBI probe into the case will expose the real culprits who used to visit the shelter home frequently. My husband has nothing to do with the case and was doing his work honestly. The police arrested him only to save some of the big faces,”  the CPO’s wife said.

The allegations were dismissed by minister Manju Verma who called them “politically motivated” . The issue of her involvement was also raised in the state Assembly.