India   All India  30 Jul 2018  Not scared to be seen with businessman: PM Narendra Modi
India, All India

Not scared to be seen with businessman: PM Narendra Modi

The digital infrastructure will get a new direction with setting up of an IT centre for Internet service in Uttar Pradesh. 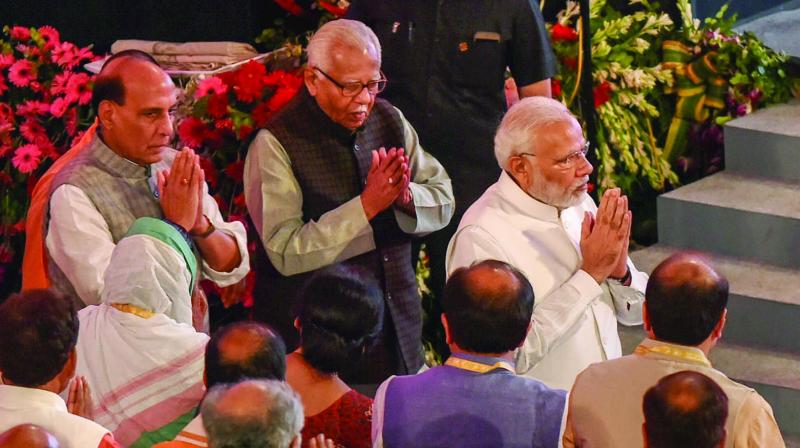 Lucknow: Firing back at Rahul Gandhi for his oft-repeated “crony capitalism” charge, Prime Minister Narendra Modi on Sunday slammed the Opposition for calling him a “friend of capitalists” and said that he is not afraid of publicly standing beside industrialists because his intentions are honest.

“Those who blame me of befriending industrialists are the same who also meet these people but behind closed doors. Mr Amar Singh is here and he knows very well who meets whom behind closed doors. Agar neeyat saaf ho to kisi ke saath khade ho, daag nahin lagta,” he said.

“Kiske jahaj me log ghoomte… pata nahi kya, (Are you not aware on whose plane, they used to travel),” he said, without naming anyone, at a government-industry interface here as he inaugurated several development projects in Uttar Pradesh.

The Prime Minister, while referring to Mahatma Gandhi, said that the latter was never apologetic of his friendship with industrialists. “Gandhiji’s intentions were so pure that he never hesitated in staying with Birla family,” he said.

Mr Modi attacked Congress chief Rahul Gandhi, without naming him, and other Opposition parties for calling industrialists “chor and luterey” (thieves and fraudsters) and said that industrialists are equal partners in the development of the nation just like farmers, artisans, banker, financers, government employees and laborers and deserved to be respected.

“Inki bhi bhoomika hoti hai. Apmanit karenge? Kaun sa tariqa hai? Jo galat hain woh toh desh chhod kar chale gaye hain,” (They also have a role. Will you insult them? Is this the way? Those who were in the wrong, have run away from the country),” he said.

The Opposition parties have been targeting Mr Modi over his picture at Davos economic forum in January with fugitive diamantaire Nirav Modi who is at the centre of the multi-thousand crore rupee PNB scam.

The Prime Minister has also been attacked for his perceived closeness with Mehul Choksi, Nirav Modi’s uncle and another fugitive businessman, whom he once publicly addressed as “Mehul bhai”.

Rahul Gandhi has of late also hit at Mr Modi for allegedly giving the offset contract in the Rafale jet deal with France to “one of his corporate friends”.

Addressing industry captains, the Prime Minister also took the opportunity to attack his political rivals who have been ridiculing his frequent visits to the state and saying that it smacked of his nervousness ahead of the Lok Sabha polls.

Asking industrialists to scale up their investment in agriculture, he said that during a recent visit to Mumbai he made a presentation before businessmen explaining how they could invest in agriculture to add value to farmer produce by spending on projects like warehousing, cold storage and packaging.

During his visit to Uttar Pradesh, Prime Minister Narendra Modi launched 81 investment projects with over Rs 60,000 crore at a ground breaking ceremony in the presence of top industrialists.

Giving a push to digitalization, the Prime Minister said that the projects that are being launched in Uttar Pradesh will carry forward the Digital India and Make in India schemes.

The digital infrastructure will get a new direction with setting up of an IT centre for Internet service in Uttar Pradesh.

Around 80 leading industrialists, including Kumar Mangalam Birla, chairman of Aditya Birla group, Gautam Adani, chairman of Adani group, Subhash Chandra, chairman of Essel group, and Sanjeev Puri, MD, ITC, besides top magnates of other major business houses, participated in the event, which comes after the “Investors Summit” that was held here in February.