No end to long wait for Gir lions in MP sanctuary

MP forest officers are of the view that it is a ruse to keep the translocation in abeyance. 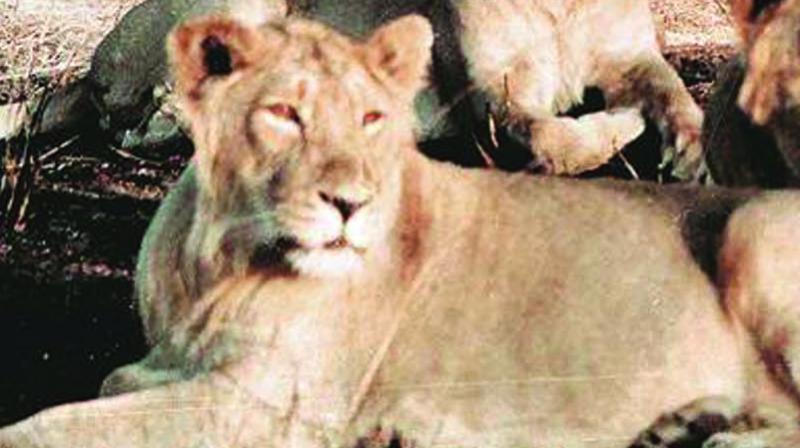 Bhopal: The proposed translocation of Asiatic lions from Gir National Park in Gujarat to Kuno Palpur wildlife sanctuary in Madhya Pradesh has hit a roadblock.

Despite the Supreme Court’s intervention, the issue of shifting a few big cats from Gir to Kuno Palpur, accorded the status of a wildlife sanctuary in 1991, has been hanging fire for nearly 30 years.

“Gir lions need a second home. They are now confined to a limited area and face prospects of extinction if an epidemic breaks out,” said wildlife biologist Faiyaz A. Khudsar, who knocked the top court’s doors seeking translocation of lions from Gir to Madhya Pradesh in 2006.

On April 15, 2013, the Supreme Court had ordered translocation of Gir lions to Kuno Palpur within seven months but thing haven’t moved  till date.

Around 184 lions have died in 2016 and 2017. Eightytwo of them died an unnatural death, indicating the mortality rate of the big cats caused by man-animal conflict, road and rail mishaps and natural calamities. On the last count, lions population has gone up to 600 from 523 in 2015.

Spread over 344 sq km area, Kuno Palpur has later created a protected area of 700 sq km for the purpose of reintroducing the Asiatic lions from Gir, as per recommendations of an expert panel set up five years ago. It lies on the Agra-Jaipur-Delhi tourist circuit and has potential for eco tourism n develop as an alternative to Gir park.

The MP government has spent Rs 90 crore for relocation of 24 villages located in the sanctuary’s core area, development of prey base, and other infrastructure.

Gujarat officials blame MP authorities for not following the guidelines to pave the way for the lions’ translocation.

Conservationist Ajay Dubey cited political reasons for the delay. “MP chief minister Shivraj Singh Chouhan is under pressure from his Gujarat counterpart to go slow on the issue. Gujarat feels its lion tourism, which earned Rs 10 crore in 2016-17, will be hit if Gir lions shift to MP,” he said

The studies cover issues such as habitat status, prey base, vegetation cover, eco system and others. “There is also a delay on the part of the MP government to notify a portion of the sanctuary as national park,” said officer from Gujarat office.

MP forest officers are of the view that it is a ruse to keep the translocation in abeyance.

“IUCN only suggests measures for translocation, but it is the Wildlife Institute of India (WII) which monitors relocation,” said an MP forest officer said.

The WII has already certified Kuno Palpur sanctuary as fit to be the second home for Asiatic lions from Gir, he said.