Videos have gone viral on social media, show men in Khaki emptying contents of drums seized during an anti-illicit liquor drive into river. 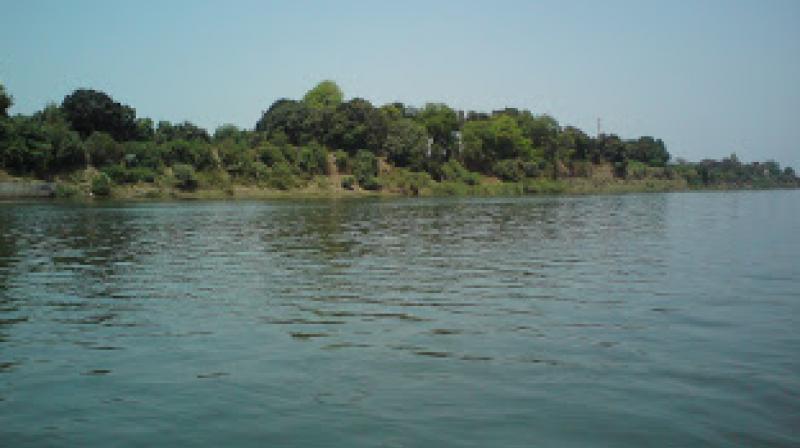 The Narmada, considered one of the seven sacred rivers by Hindus, is at the centre of a massive tree-plantation as well as anti-liquor drive by the BJP government in the state. (Photo: File)

Bhopal: At a time when the Madhya Pradesh government is working towards ensuring that liquor shops remain at a distance of over five kilometres from the Narmada, videos purportedly showing state Excise department personnel emptying liquor-filled drums into the river have raised the hackles of the opposition Congress.

The party has condemned the incident, which happened in Dhar district on Friday, and said action should be initiated against the Excise officials for making the river, the state's lifeline, "impure".

Videos, which have since gone viral on the social media, show men in khaki, apparently from the Excise department, emptying the contents of drums seized during anti-illicit liquor drive into the river.

The department, on its part, has denied that the men poured liquor into the river and claimed that it was only the additive, a primary ingredient in the manufacture of such alcohol that had been released.

"The 'masala' (additive) from which the liquor is made has been dumped into pits by the side of the Narmada. We are well aware of the river's sanctity and would never do anything to make it impure," Dhar Assistant Excise Officer Sharad Chandra Nigam said on Sunday.

However, former state Congress spokesperson KK Mishra said, "The officials have committed an offence by dumping liquor into the holy river. This act has hurt the religious feelings of Hindus."

He also accused the Excise department of polluting the river and making it impure.

The Narmada, considered one of the seven sacred rivers by Hindus, is at the centre of a massive tree-plantation as well as anti-liquor drive by the BJP government in the state.

The government is taking steps to shut the liquor shops located within five kilometres of the banks of the Narmada so that the river does not become the recipient of such effluents.

While Chief Minister Shivraj Singh Chouhan had earlier embarked on a six-month "Narmada Seva Yatra" that ended in May last year, senior Congress leader Digvijay Singh had completed a six-month, 3,300-kilometre circumambulation of the river in April this year.