India   All India  30 Jul 2018  Anna Hazare to go on hunger strike to protest against delay in appointing Lokpal
India, All India

Hazare said that his hunger strike in New Delhi in 2011 had pressurised the then government, leading to passing of the Lokpal Act in 2013. 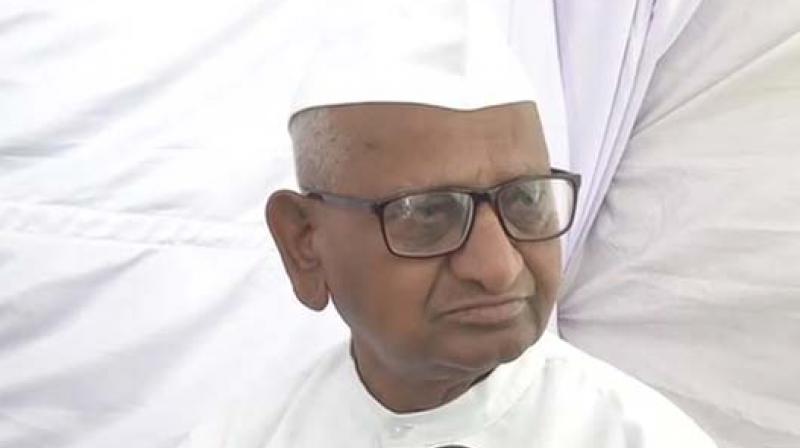 Speaking to ANI, Hazare said, 'On Mahatma Gandhi Jayanti, October 2, I will start a protest in my village, Ralegon Siddhi, for the delay in implementing the Lokpal and Lokayuktas Act, which is a very capable means to fight corruption. (Photo: ANI)

Ralegan Siddhi: Social activist Anna Hazare will launch a protest against the Union Government from October 2 over the delay in the implementation of the Lokpal and Lokayuktas Act.

Speaking to ANI, Hazare said, "On Mahatma Gandhi Jayanti, October 2, I will start a protest in my village, Ralegon Siddhi, for the delay in implementing the Lokpal and Lokayuktas Act, which is a very capable means to fight corruption."

Saying that the law would have helped curb at least 60-70 per cent of the corruption in the country, Hazare said that his hunger strike in New Delhi in 2011 had caused the then Congress-led Union Government to come under considerable pressure, leading to the passing of the Lokpal Act in 2013.

However, he said that ever since the Prime Minister Narendra Modi-led Bharatiya Janata Party (BJP) came into power, the execution of the law, which would result in the constitution of a Lokpal, an anti-corruption authority, has been stalled

"A lot of people in the country had pinned their hopes on Prime Minister Modi for the execution of the law as he had as he had promised the same during his campaigns, he said he wanted to form a corruption-free India," Hazare told ANI.

He further stated that apart from stalling the Lokpal's implementation, the Prime Minister Modi-led Union government had passed laws to weaken it.

He wondered how a government cannot prioritise a bill that was passed by both the houses of the parliament during the previous government, saying that, "These bills are instituted under the Constitution of the country. How can they stall it?"

On a related note, Hazare held a hunger strike from March 23 to 30 demanding the appointment of Lokpal at the Centre and Lokayuktas in states, among other demands.

Also, accusing the Centre of being apathetic to the issue of appointing Lokpal, Hazare had earlier said that it was clearly the 'ego' of the government for not executing the Act even after the Supreme Court's direction.