GJM supporters earlier in the day took out rallies at Chowkbazar area of the hills carrying black flags in protest against police action. 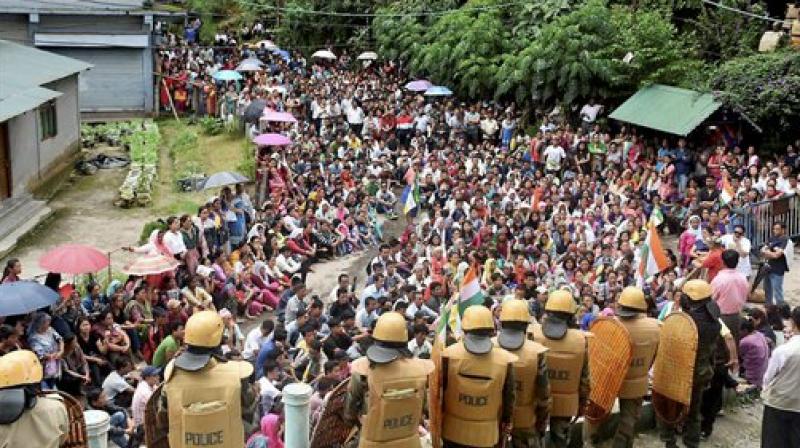 Normal life remained crippled on the 46th day of the ongoing indefinite strike to press for a separate Gorkhaland state. (Photo: PTI/File)

Jaigaon (West Bengal): In a fresh round of violence, Gorkha Janmukti Morcha (GJM) supporters and Police clashed in Jaigaon on Sunday. The protest turned violent at Jaigaon in Alipurduar district when police stopped a rally by protesters, injuring many including police personnel.

GJM supporters earlier in the day took out rallies at Chowkbazar area of the hills carrying black flags in protest against the police action on pro-Gorkhaland supporters.

Shouting slogans against the state government, the protesters demanded the Centre's intervention in the matter.

Pro-Gorkhaland supporters had on Saturday clashed with the police during which, the GJM had claimed, one of its supporters suffered a bullet injury.

The charge was, however, denied by the ADG (Law and Order) who had termed it as "completely baseless".

Several protesters and police personnel were injured in the clashes that took place in Sukna area of the hills on Saturday.

The police and security forces patrolled the streets of the hills and kept a tight vigil at all entry and exit routes. Normal life remained crippled on the 46th day of the ongoing indefinite strike to press for a separate Gorkhaland state. Barring medicine shops, business establishments, restaurants, hotels, schools and colleges remained closed.

The GJM and other hills parties have planned to organize 'Global Gorkhaland Unity March' in Darjeeling, other parts of the country and abroad on Sunday to express solidarity with the movement for a separate state.

"This is a global march that we have planned not only in various states of India but also abroad where our Gorkha brothers are either settled or working," a GJM leader said.

The GJM-led indefinite shutdown in Darjeeling has taken a toll on students, prompting a prominent boarding school to shift classes 10 and 12 to Siliguri to clear the syllabus backlog, while a Kurseong-based school may follow suit.

Classes were suspended in the hill schools in view of the indefinite strike, going on since June 15, demanding a separate Gorkhaland state.