Sunita Rawat is currently posted in a school in Dehradun's Ajabpur Kalan since 1996 despite receiving promotion in 2008. 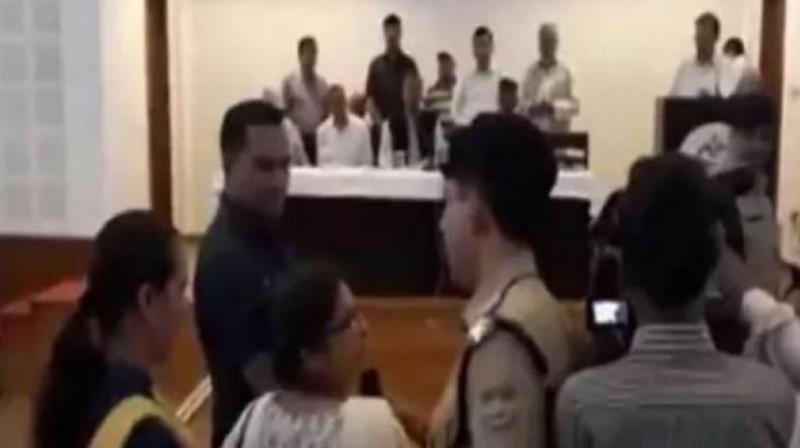 In video, Uttarakhand CM is seen losing his temper and directing the police to suspend the teacher, after she allegedly used abusive language and showed indecency, while seeking transfer from a remote location. (Photo: Screengrab | ANI)

Dehradun: In a dramatic turn of events, a query filed by RTI activist Praveen Sharma has revealed that Uttarakhand Chief Minister Trivendra Singh Rawat's wife Sunita Rawat has been posted in the same Dehradun school for the last 22 years.

Sunita Rawat is currently posted in a school in Dehradun's Ajabpur Kalan since 1996 despite receiving a promotion in 2008, the RTI query revealed.

"We had asked Uttarakhand CM about the posting of his wife. Earlier, they responded indirectly but after we appealed, their answer was quite shocking for us as she is posted in Dehradun for the last 22 years," said Praveen who faced a few difficulties while obtaining the information.

Praveen also accused Sunita Rawat of buying huge acres of land and, therefore, demanded a proper investigation into the matter.

"She has brought huge acres of land in Uttarakhand. We want the court to investigate from where did she buy amass this property. We want the governor to take action against his wife. It is a matter of concern, as no employee can buy any property without providing information to the concerned department," Praveen said.

Uttarakhand Chief Minister Trivendra Singh Rawat had on Thursday ordered the suspension of school teacher Uttara Bahuguna, who allegedly used abusive language during a Janata Darbar session while seeking a transfer from a remote location where she was posted for last 25 years.