The video, which was widely shared on social media, shows a group of fishermen on a trawler hounding a tiger with bamboo poles and sticks. 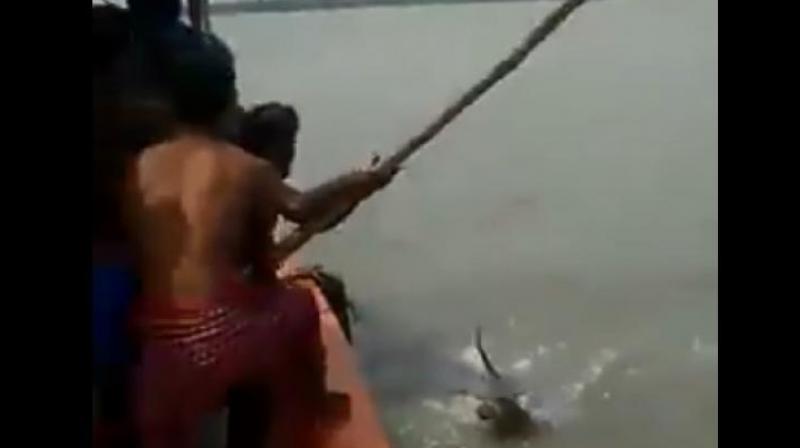 The tiger somehow managed to wriggle away from the attacks by the fishermen. (Photo: Video screengrab)

Kolkata: In a brutal act that highlights the issue of man-animal conflict, a video showing a group of fishermen hounding and tormenting a tiger in the Sunderbans river has been doing the rounds.

The video, which was widely shared on social media, shows a group of fishermen on a trawler hounding a tiger with bamboo poles and sticks when the animal was swimming across the river towards Kendo island.

The tiger somehow manages to wriggle away from the attacks by the fishermen and crosses the island.

The incident which took place on Thursday was taken note by authorities. The forest department on Saturday said it will take action against those involved.

Field Director of the Sunderban Tiger Reserve Nilanjan Mallick said that according to reports received, the tiger was swimming towards Kendo islands on the western fringes of the Sunderbans when it was hit with bamboo poles by fishermen.

"We will take action under Wildlife Protection Act against those found involved in the incident. We are empowered to take such action," Mallick said.

Sunderban Biosphere Reserve Director R P Saini said, "We have taken note of the incident. The Forest department is taking measures as per provisions laid down to prevent man-animal conflict in the Sunderbans and protect the Tiger population in the forest reserve."

State Wildlife Board member Joydip Kundu said while conservation work was taking place satisfactorily in the Sunderbans, such incident was uncalled for.

Watch the video below: