Killing in name of ‘gau bhakti’ is unacceptable, says Modi 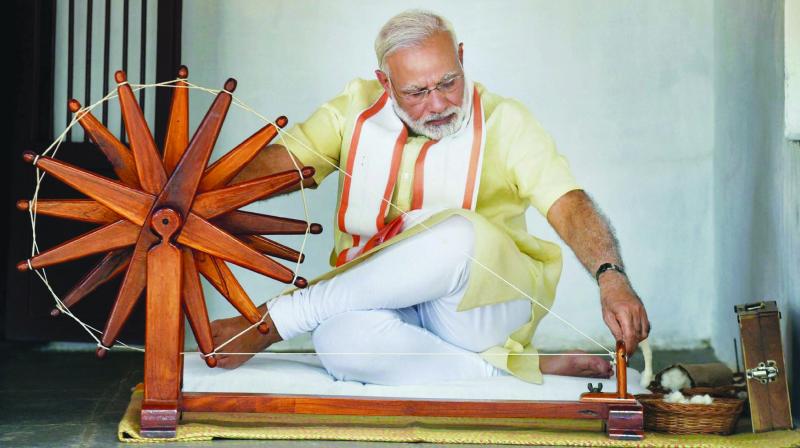 New Delhi: At a time when the country is erupting with both anger and despair over lynchings by cow vigilantes, Prime Minister Narendra Modi came down heavily on them and warned that “killing in the name of cow protection will not be tolerated.”

Delivering a speech after visiting Sabarmati Ashram in Ahmedabad, Gujarat, the Prime Minister said that killing people in the name of  “gau bhakti is not acceptable.”

Speaking at an event organised to mark 100 years of the Sabarmati Ashram and the 150th birth anniversary of Shrimad Rajchandraji, a guru of Mahatma Gandhi, the Prime Minister said that “Gandhiji and he would never have approved of such incidents… We belong to a land of non-violence. Violence is nor the solution to any problem.”

“Let’s all work together, create the India of Mahatma Gandhi’s dreams, create an India our freedom fighters would be proud of,” he added.

Taking a jibe at the Prime Minister for invoking Mahatma Gandhi to condemn cow vigilantes, CPI(M) general secretary Sitaram Yechury said, “We are aware of Gandhi’s principles. We do not want him (Narendra Modi) to remind us. We want to know what the Prime Minister proposes to do.”

Hours after Mr Modi’s statement, a man was killed in Jharkhand for allegedly carrying beef and his van was set on fire.

The Prime Minister’s strong indictment and warning came a day after thousands of people across the country took to the streets in a citizens’ protest, called “Not in My Name”, against the recent incidents of mob killings.  Last Thursday, a 16-year-old Muslim boy, Junaid Khan, was killed by a group of about 20 men on a Mathura-bound train.

Junaid was returning home after Eid shopping when the group of men first called him a “beef eater” and, after beating him up, stabbed him to death. Five people have been arrested so far.

The Prime Minister said that it made him “angry that people are running shops in the name of cow protection.”

Hitting out at the self-styled cow rakshaks, he said, “Some people carry out anti-social activities at night and during the day they masquerade as cow protectors.”

For Mr Modi, if anyone wants to save cows, they should “ensure that the cows do not eat plastic.”

In August last year, the Prime Minister had issued a similar warning after a succession of brutal attacks on dalits and Muslims by cow vigilantes were reported from several states. “These people are hell bent on destroying the society… these people are trying to create a conflict in the society in the name of gau raksha,” the Prime Minister had said while inaugurating an NTPC superthermal power project at Medak in Telengana.

According to the website IndiaSpend, “In the first six months of 2017, 20 cow terror attacks were reported — more than 75 per cent of the 2016 figure, which was the worst year for such violence since 2010.”