India   All India  30 May 2020  Watch | All that the grim faced guest workers get is 'Tareekh pe Tareekh'
India, All India 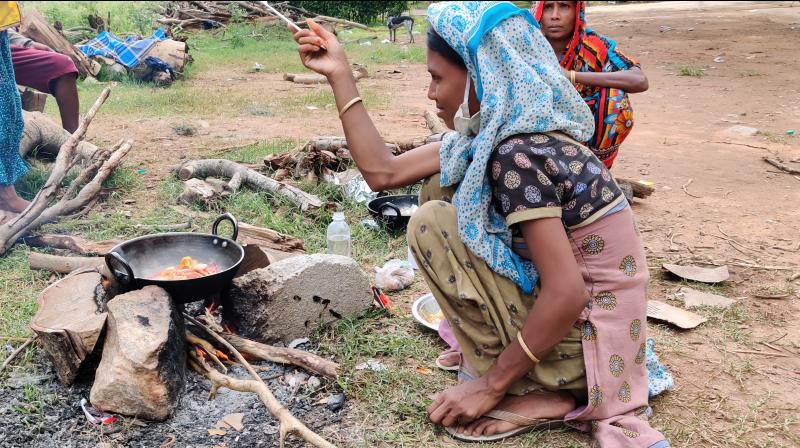 The situation for 42 stranded workers from Assam is grimmer. Though they were told by the police that the train to Guwahati would leave on May 26 the wait is unending.

Bengaluru: Life has come to a standstill for more than a thousand guest workers from Odisha and Assam. The grim faces watch the movement of cops carefully in anticipation of good news that they will finally be heading back to their homes.

After traversing hundreds of kilometres to reach Bengaluru, got a beating by the policemen, getting fleeced by auto-rickshaw drivers and lodges that charged them their entire savings all the guest workers get is the date of travel that never comes.

Shivaprasad Rao form Balaswar in Odisha was working at granite factory in Mysuru. When the lockdown was announced the owner of the factory took a flight to leave the state and stopped the calls of the labourers. However, when the situation became adverse Rao had to ask his relatives in the village to lend him some money so that he could reach Bengaluru.

“We are here for six days now. There is no arrangement for proper food. What we get daily is dry food at an irregular interval. At our workplaces, we were not paid for the last three months as lockdown happened and the owner never bothered about us. We are not at all informed about the train schedules. Over 50 of us are from Odisha itself,” Rao narrated his woes.

The situation for 42 stranded workers from Assam is grimmer. Though they were told by the police that the train to Guwahati would leave on May 26 the wait is unending. Getting disillusioned with the kind of food being served daily at irregular intervals women folks were seen preparing the food with the little raw materials they are left with.

“ I used to work at a coffee estate near Chikkamagaluru. Since lockdown began, we are out of jobs. The owner asked us to leave and never to come back. We paid Rs 800 per person to reach the town. Since the bus was not available a person provided dinner and shelter for the night at a committee hall and we boarded the bus to Bengaluru. At a lodge near the station, we paid Rs 100 per person to spend the night. When we went to the railway station to look for the train an auto-rickshaw driver told us that migrants from Bihar have been kept at a shelter. Then we came here. It has been 10 days nowhere, and we are given assurance that we will board a train. We are filling some of the other forms daily but have not got any permission yet. Every day the policemen take our photos and the wait continues,” a sobbing Munir Ali from Assam explained.

His journey is more rigorous as after reaching Guwahati his family will have to walk further hundreds of kilometres to reach the village.

On days when they run out of patience after consuming chappatis with one small pouch of the pickle, they go out of the camp to buy pickles. For the past few days, the serving of milk for the infants at the camp is also stopped.

Life has come to a standstill for more than a thousand #guestworkers from #Odisha and #Assam. They are in anticipation of good news that they will finally be heading back to their homes. A guest worker from Odisha, Anil Sahu speaks about the situation on ground. #COVID19Lockdown pic.twitter.com/cnqGvIHEIv

The policemen have told the migrants that soon they will be evicted out of the place as the shelter is used for marriage purposes and the increasing exasperation to go home is evident from their faces.

When asked about the cases in Bihar where reports of several families not accepting the migrants back for the fear of transmission of COVID the district magistrate of Patna, Ravi Kumar said that migrants from places like Maharashtra, Surat, Bengaluru, Delhi, Ghaziabad and Gurugram will be kept at quarantine centers'.

“The district magistrates of other districts may add to the list of cities based on the number of rising cases,” he stated.