India   All India  30 May 2018  Women in Lariapali unite to fulfil dreams of their children
India, All India

Women in Lariapali unite to fulfil dreams of their children

Women in Lariapali village in Odisha have put a ban on the sale and consumption of liquor. 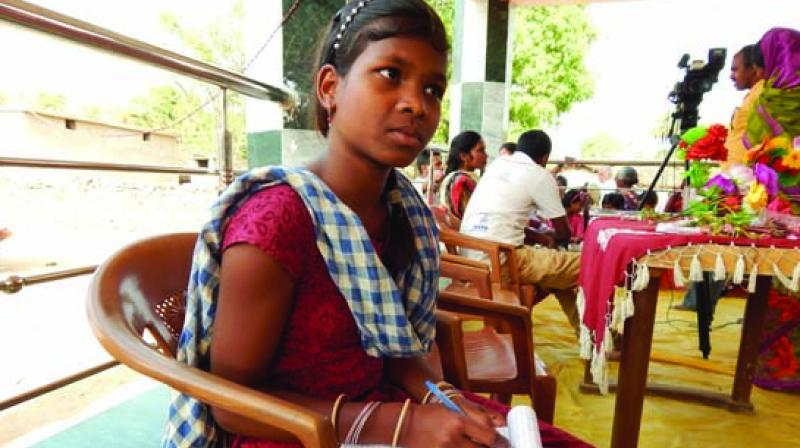 Odisha ranked fourth in the list of worst rate of child sexual abuse in India, while the country stands second in the world in the same category. According to the National Crime Records Bureau (NCRB) data, Odisha secures fourth position in the list of worst rate and crime numbers under the Protection of Children from Sexual Offences (POCSO) with 6.8 per one lakh child population. Keeping this in view, it is important that we appreciate the efforts made by women in Lariapali village of Sambalpur district in Odisha to bring about a complete ban on sale and consumption of liquor. This has not only encouraged the children to be able to think of having a bright future, but has also made them healthier — both mentally as well as physically.

A young girl named Sukanti Kalu, aged 14 and a student of Class 8, representing thousands of boys and girls, says: “Now I am fully convinced that I can fulfil my dream of becoming a teacher.” Responding to a question, she answers with confidence: “My father used to drink both country liquor as well as English liquor and have all kinds of other intoxicants as well, when it was time for him to come home in the evening, we would hide in the dark corners of our house. While we would hide my poor mother would be beaten up by my drunken father, whenever I would come forward to try and save her, I would also get beaten up and as a result I would go back to hiding.” Sukanti has a smaller brother — Samiro — who is 12 years old and studies in Class 6.

Sukanti’s father’s — Ghanshyam Kalu — works as a mason. He would spend all his daily earnings at the local brewery drinking alcohol in the evening. A relative of his, Rukmani Pradhan, says: “Ghanshyam has left drinking because he does not get any alcohol in our village, first he used to drink mahua and rice liquor, and his wife was also addicted to toddy (palm liquor).”

Holding a pen in the right hand and holding a copy in the left, the smiling Sukanti says: “Now our father and mother want to teach us, now when our father comes home in the evening, he definitely brings something for us, like sweets or fruits. He gets us copies, pens, books and presents whenever we ask him for it, and says proudly that one day my daughter will manifest my name; I also keep thinking that now I should study with my heart and soul so that I can grow up and teach all the children in the village. I will teach them free of cost.”

About this sudden change in the village, 23-year-old Padmini Badnaik says: “I am a BA graduate myself, my house is in the district Sundergarh, but I have decided that I will definitely do something for my people. I gathered women here to make them aware of the loss caused by alcohol, and prepared them to stop the sale of alcohol in the village. At first there was definitely some difficulty, but now the situation is very good.”

Sharing the method that she adopted she says: “In the beginning, we went to their homes to bring women here to us, and tried to solve the problem by sitting with two to four women at a time, most of them would ask, ‘What can we do?’ I gradually made a self-help group (SHG) of 10 women, who started protesting against the local village liquor brewery owners. Seeing these women more women started becoming a part of the group. So, while the group size increased, it was decided to name the group Nari Shakti Sangh.”

The president of Nari Shakti Sangh is Hamadari Dharwa, who is also the deputy sarpanch. The secretary is Parmodniya Nayak. Another member introducing herself, says: “My name is Pushplata Naik, like other men in the village my husband used to drink alcohol, due to which our domestic condition was very bad. The situation was same in homes of our friends too, so we decided that we have to shut down the liquor brewery. We got a lot of women to come and support us and we created a big ruckus at the brewery, for which our husbands had beaten us also, but from next day, the owner of the bhatti (brewery) brought Rs 30,000 and said that you can take this and spend the money whichever way you want. But after the formation of our group, we decided that if any man or woman in the village would be caught drinking alcohol, then for the first offence, a fine of Rs 1,000 would be imposed. If the person was caught the second time, the penalty amount would increase to Rs 2,000. A similar rule was made for bhatti owners. If they were caught making liquor and selling it in the village, then for the first offence they would have to pay Rs 5,000 and for the second offence, the penalty amount would be doubled to Rs 10,000. The money collected — which amounted to close to Rs 1 lakh — from these penalties was used to beautify the village chaupal (public meeting place). The biggest benefit of this is that alcohol is now not available in our village. The houses in the village are peaceful and the emphasis is on education and health of children. Earlier, the children also used to be roaming around under the influence of toddy.”

In thousands of villages like Lariapali, millions of children don’t know how or when their dreams will be fulfilled, or will they ever get fulfilled. The big question is can every child fulfil his or her dreams like Sukanti Kalo? This is the question that every alcoholic should ask himself, at least once before picking up a bottle of alcohol. This question and the answer can surely change the lives of millions of children.