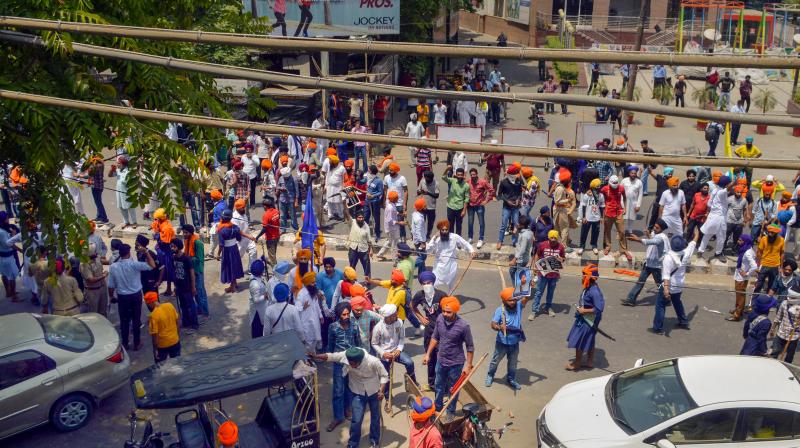 Nihangs gather after a clash between followers of Shiv Sena and pro-Khalistani Sikh organisations, near Kali Mata Mandir in Patiala, Friday, April 29, 2022. (PTI)

Chandigarh: The Punjab government on Saturday suspended mobile internet and SMS services, except voice calls, in Patiala district a day after clashes between two groups over an anti-Khalistan march left four people injured.

The order to suspend the services was issued by the home affairs and justice department and heavy police security was deployed at the site of the clashes outside the Kali Mata temple in Patiala.

"In exercise of power conferred upon me by virtue of temporary suspension of telecom services (public emergency or public safety) rules, 2017, I Anurag Verma, principal secretary, home affairs and justice, do hereby order suspension of the mobile internet services (2G/3G/45/CDMA), all SMS services and all dongle services etc provided on mobile networks except voice calls in the territorial jurisdiction of the district of Patiala from 9:30 am to 6 pm on April 30," the order read.

Four people were injured as the two groups clashed and hurled stones at each other on Friday and police fired in the air to bring the situation under control.

A spokesperson of the Chief Minister's Office said Mukhwinder Singh Chinna has been appointed as the new IG-Patiala Range while Deepak Parik will be the new senior superintendent of police for Patiala.

Wazir Singh has been appointed as the new superintendent of police of Patiala.

Curfew in Patiala after clash over 'anti-Khalistan march'

Curfew was clamped Friday evening after four people were injured as two groups clashed over an anti-Khalistan march in this Punjab city, hurling stones at each other. Police opened fire in the air to bring the situation under control.

The clash took place outside the Kali Mata temple after Singla's group had begun the "Khalistan Murdabad March" from the nearby Arya Samaj Chowk.

Some Sikh activists, including Nihangs, who had initially gathered at Dukh Niwaran Sahib Gurdwara, marched towards the temple, a few of them seen brandishing swords. Their procession too did not have permission from the authorities, officials said.

Near the temple, the two groups came face to face and hurled stones at each other, police said. The temple gates were locked and police deployed in large numbers to prevent the violence from spreading further in the city, officials said.

Harish Singla said the march was organised as a reply to the announcement by the Sikhs for Justice to mark April 29 as the foundation day of Khalistan. The banned group based overseas is headed by Gurpatwant Singh Pannun.

Two of the four people injured in the violence are policemen. Their condition is stable, police said. They have registered a case over the violence. The National Commission for Minorities wrote to the Punjab government seeking a report on the Patiala violence within a week.

"Visuals from Patiala are disturbing, Congress leader Rahul Gandhi tweeted, stressing that peace and harmony are most imperative.

Punjab Chief Minister Bhagwant Mann summoned a high-level meeting of officers after the clash. The CM later said he has ordered a probe into the clash and given strict instructions that not a single culprit is spared.

"Anti-Punjab forces will not be allowed to disturb Punjab's peace at any cost," he said.

"The incident of clashes in Patiala is deeply unfortunate, he tweeted. We are closely monitoring the situation and will not let anyone create disturbance in the state."

A few hours after the clash, Patiala Inspector General of Police Rakesh Agarwal told reporters that the situation was under control.

"We have called force from outside. A peace committee meeting has been called by the Deputy Commissioner on Saturday," he said.

He said the incident took place because of rumours spread by some some mischievous elements.

We have controlled the situation. We are also conducting a flag march in Patiala city," he added.

Patiala Deputy Commissioner-cum District Magistrate Sakshi Sawhney said, We appeal to all to maintain calm and not to lend credence to any rumours."

Several Punjab ministers and MLAs expressed concern over the violence.

"I strongly condemn the clashes that took place in Patiala today. Appealing to all sections of society to follow the path of peace and humanity," Punjab's Finance Minister Harpal Singh Cheema said.

But the opposition targeted the AAP government over the worsening law and order situation.

"Complete anarchy in the state, Leader of the Opposition Pratap Singh Bajwa tweeted.

It's high time that the Punjab CM gets his house in order. Law & order has collapsed in the past one month with one incident after the other taking place in the state, the Congress leader said.