India   All India  30 Apr 2020  Andhra Pradesh: With easing of lockdown, trucks are slowly back on roads
India, All India

Andhra Pradesh: With easing of lockdown, trucks are slowly back on roads

The lorry association has also sought exemption of quarterly tax, but the state government only agreed to defer it by three months. 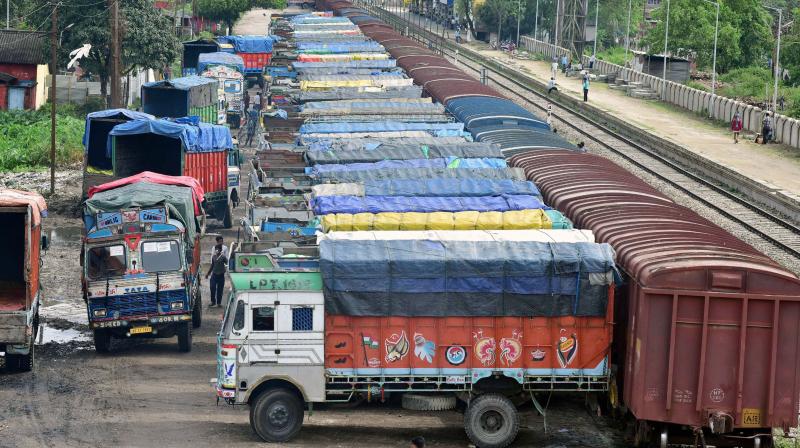 Amaravati: Easing of lockdown curbs,picking up of Rabi farming season and the prospects of more intra-state movement seem to have perked up the private goods transport sector in Andhra Pradesh with about 30 per cent of the trucks started rolling into the roads in the last few days.

Truck operators, however, are unhappy that lorries carrying non-essential commodities are still not being permitted despite clear guidelines from the Centre.

Following considerable easing of restrictions in the ongoing national lockdown, about 30 per cent of the trucks have started services and the government has pitched in with its part in providing safety kits to the drivers. Mostly essential commodities, fruits and paddy are being carried both within and outside the state.

The AP government has started distributing about 30,000 'driver protection kits', each containing three face masks, a pair of gloves, a sanitizer and two soaps to ensure hygiene of the driver and the cleaner, according to Joint Transport Commissioner SAV Prasada Rao.

The kits were being distributed to truck drivers in all the districts of the state, he told PTI.

"Right now mostly essential commodities and fruits are being transported even on inter-state routes. Within the state, paddy movement is high as harvesting of Rabi crop is picking up," Rao said.

But, truck operators in Andhra Pradesh see red as "many restrcitions are still in place" and vehicles carrying non-essential commodities were not being allowed despite clear guidelines from the Centre permitting them.

"Truck operations are badly hampered as many restrictions are still in place though the Centre permitted movement of non-essential goods. We have taken up the issue with the state government and are hoping for a positive outcome," AP Lorry Owners Association General Secretary Y V Easwara Rao said.

The Union Home Ministry had on March 29 asked the states and Union territories to allow transportation of all goods, without distinction of essential and non-essential, during the lockdown period.

Further, in Andhra Pradesh, the village volunteers were telling the drivers that they would be sent to a government quarantine facility for 14 days if they took up a trip, which is further dissuading them from resuming work, Easwara Rao said.

"This is deterring drivers from coming to work. As such we have a severe shortage of drivers of about 35 per cent and now they are scared to come out. We are unable to resume operations in such a scenario," he said.

In Kakinada, for instance, about 100-odd lorries were stranded because drivers were reluctant to attend work.

Transport Principal Secretary M T Krishna Babu took up the issue with East Godavari district Collector Muralidhar Reddy to ensure the drivers were not put to any harassment.

"We are ready to comply with the government guidelines and ensure testing of drivers for coronavirus," Easwara Rao added.

The lorry association has also sought exemption of quarterly tax payment, but the state government only agreed to defer it by three months. "We are waiting for May 3, when the extended lockdown is supposed to end, for things to become clear. Even then, full-fledged truck operations will take some time to resume," Easwara Rao said.