India   All India  30 Apr 2019  Eastern Naval Command all geared up for cyclone 'Fani'
India, All India

Eastern Naval Command all geared up for cyclone 'Fani' 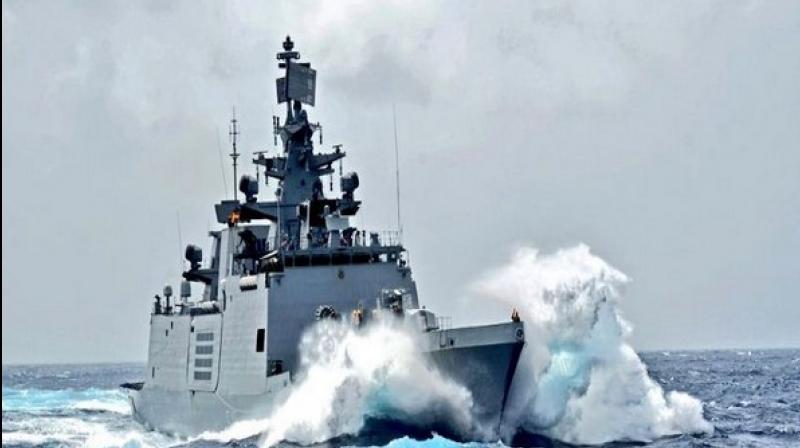 As per the India Meteorological Department (IMD), cyclone ‘Fani’ intensified into severe cyclone at 5:30 pm on April 29. It is to intensify further and move towards the Odisha coast. (Representational Image)

Chennai/Bhubaneswar: In view of ‘Fani’ intensifying into a severe cyclonic storm on the southern and south-eastern coast of India, the Eastern Naval Command is all geared up to render necessary humanitarian assistance if the need arises.

“Naval aircraft are standing by at Naval air station INS Rajali at Arakkonam, Tamil Nadu and INS Dega at Visakhapatnam, Andhra Pradesh, to undertake reconnaissance, rescue, casualty evacuation and air drop of relief material to the stranded if required,” said a spokesperson of India Navy on Tuesday.

The National Disaster Response Force (NDRF) and the Indian Coast Guard have also been put on high alert and are coordinating with the state governments of Tamil Nadu, Andhra Pradesh, and Kerala.

As per the India Meteorological Department (IMD), cyclone ‘Fani’ intensified into severe cyclone at 5:30 pm on April 29. It is to intensify further and move towards the Odisha coast.

Odisha government on Monday directed the State Disaster Management Authority (SDMA) to keep a close watch over the situation and has asked concerned departments to stay prepared to deal with any challenge.

The Chief Secretary has also directed the authorities to keep ready cyclone and flood shelters in coastal areas with all necessary emergency equipment and materials. Health and Family Welfare, and Food Supplies and Consumer Welfare Departments have also been asked to keep stock of essential medicines and food items in district headquarters.

According to an official statement, Panchayati Raj and Drinking Water Departments have also been asked to ensure the supply of drinking water as per the requirement in the marooned areas.

As per the available readings, the cyclone is shifting its original track and is coming closer to the coast. It was earlier predicted that the cyclone would move inside the sea.

Odisha Chief Secretary Padhi said the number of Disaster Rapid Action Force (DRAF) units has been increased to 20 from 10 and all 20 units are now fully functional with necessary equipment. Twelve 12 units of NDRF team are also available in the state to respond to any emergency.

According to officials, there are 879 multipurpose cyclone shelters in the costal belt of Odisha. These shelters can accommodate about one million persons during cyclone and flood.

A total of 252 power boats in working condition have been placed with different District Collectors. The Fire Stations have also been equipped with necessary search and rescue equipment.

The conditions of the sea are likely to be very rough along and off Puducherry, Tamil Nadu, and south Andhra Pradesh coasts till May 3. The fishermen have also been advised not to venture into deep sea in these coastal areas.