Rahul: BJP neither appreciates different opinions nor does it respect its own elders. 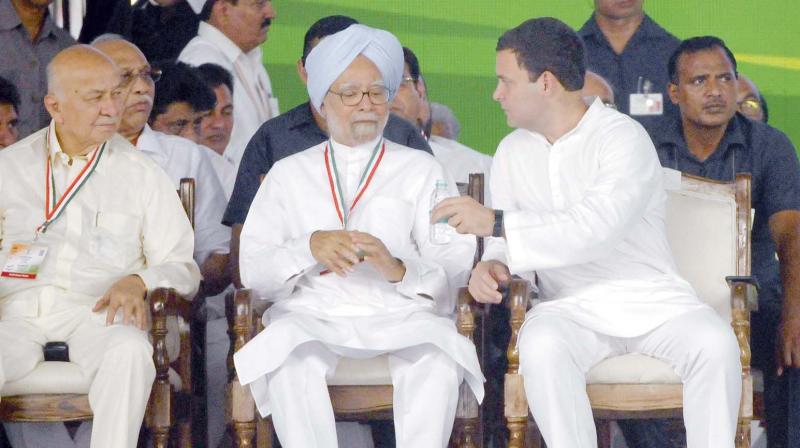 New Delhi: Taking potshots at the BJP on Sunday, Congress president Rahul Gandhi said that difference in opinions has been allowed to flourish in his party.

Referring to senior leader Salman Khurshid — who said that he was not privy to the impeachment move against Chief Justice of India and admitted to Congress’ role in perpetuating communal riots in India — Mr Gandhi said, “I respect differences of opinion and will protect any dissenters. However, BJP neither appreciates different opinions nor does it respect its own elders. Whereas in BJP only one man’s views prevail, we have leaders with different views.” Cautioning the party leaders, Mr Gandhi also added that currently the party is fighting the RSS and its ideology and should be seen as one in the battle. After the comments of the Congress chief, Mr Khurshid, who was sitting in the audience, was seen applauding. Mr Gandhi said Congress has tolerance for dissent.

“In BJP, there can be only one ideology and that’s Modi and Amit Shah’s thought. No one matters there. In our party, whether you are 80 or 18, you will be given a place, respect, love, and trust. If someone deprived you of these, I will personally launch an inquiry into it. There is no dearth of leadership roles in our party,” he said.

Urging and appreciating the party workers, Mr Gandhi called them ‘sher ke bachche’ for carrying on the ideology of the party in trying times.