Mr Gandhi said he had thought of God then and added that he would undertake the Kailash Mansarovar yatra after the Karnataka polls. 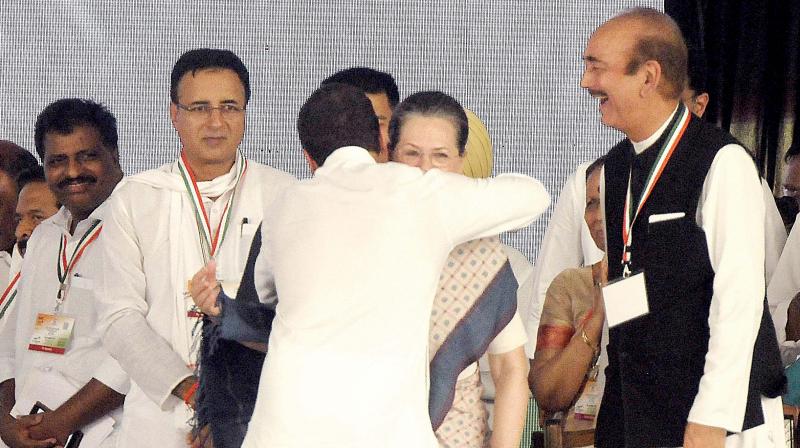 New Delhi: Sounding the bugle for the 2019 Lok Sabha elections, Congress president Rahul Gandhi on Sunday tore into the BJP-led Central government at the party’s “Jan Aakrosh Rally” here. Launching a blistering, personal attack on Prime Minister Narendra Modi, the Congress president oozed confidence at the Ramlila Maidan rally and said “one has to search for the truth in the speeches that are given by Mr Modi”. Predicting that his party was in a comeback mode all over the country, he claimed that the Congress would not only retain power in Karnataka but also wrest it from the BJP in the coming Assembly polls in Rajasthan, Madhya Pradesh and Chhattisgarh, and of course in the Lok Sabha. Mr Gandhi added: “The name of this rally is ‘Jan Aakrosh’ (public anger). Wherever I go these days, I ask a simple question to the people: ‘Are you happy?’ — and I get the same answer: ‘No’.”

Hitting back at the Congress, BJP president Amit Shah accused it of practising dynastic politics, and termed the party’s Jan Aakrosh Rally as a “Parivar Aakrosh Rally”. In a series of tweets, Mr Shah attacked the Grand Old Party, saying the Congress were ousted from successive states in Assembly elections over the past three years owing to “Jan Aadesh (public order)”. Mr Shah later tweeted: “A dynasty and their courtiers, who were sent out of state after state by ‘Jan Aadesh’ ... now pretend to represent ‘Jan Aakrosh’. Today’s Congress rally is nothing but a ‘Parivar Aakrosh Rally’ which highlights their increasing irrelevance.”

Addressing his first rally in Delhi as Congress president, Mr Gandhi said that Mr Modi had been too “nervous” to raise the issue of the Chinese occupation of Doklam during his Wuhan visit and charged the Prime Minister with “sipping tea without a single agenda” — which he said was “unthinkable” by any previous Prime Minister. “Indian PM is having tea with Chinese President without a single agenda. In Doklam, China is making helipads and extending the airport. The Indian PM is there in China without an agenda, conducting discussions. Our PM hasn’t spoken a single word on Doklam in China. This is unprecedented in 70 years. Indiraji, Jawaharlalji, Vajpayeeji, Deve Gowdaji, Inder Gujralji and many others have never done something like this,” Mr Gandhi said.

Mr Gandhi accused the Prime Minister of staying silent on several issues, and questioned why the country’s “chowkidar” was silent on issues of graft and weakening of institutions. He also mentioned the allegations against railway minister Piyush Goyal and the increase in wealth of a company owned by Mr Amit Shah’s son Jay Shah. He went on to challenge the government and asked it to divulge the price of a jet in the Rafale deal. Mr Gandhi said: “The Modi government is buying the aircraft at almost double the rate at which the UPA government was buying it... and giving the contract not to Hindustan Aeronautics Ltd but to the private company of his industrial friend.” He also questioned the PM’s silence on the fugitives Nirav Modi and Mehul Choksi.

Talking about farmers, Mr Gandhi said: “Without the Congress Party, the farmers of India cannot live. If the Congress wasn’t there, all lands of Indians would have been snatched by Modiji.” He also said demonetisation and the hasty implementation of GST (“Gabbar Singh Tax”) had broken the back of small businesses and traders. Adding that India had the highest unemployment rate in the past eight years. Mr Gandhi said the Congress had united all sections of society and spread love in 70 years, unlike the BJP, which he said attacked dalits and minorities.

Raising the issue of the weakening of institutions under the Central government, Mr Gandhi spoke about the unprecedented press conference by four senior Supreme Court judges, and said: “Usually, people go to the courts for getting justice, but now it’s the Supreme Court judges who are going to the people’s court for justice.” He also raised the issue of the death of Judge Loya, and accused the government of trying to fill people from the RSS into institutions.

Referring to the incident where an aircraft carrying him to Karnataka’s Hubbali had nosedived before landing safely, Mr Gandhi said he had thought of God then and added that he would undertake the Kailash Mansarovar yatra after the Karnataka polls. In the past, Mr Gandhi has faced criticism for his spate of visits to temples.