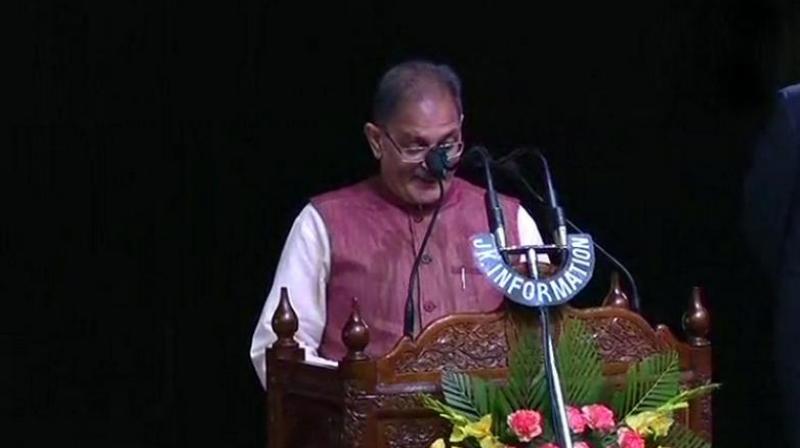 Kavinder Gupta is a former mayor of Jammu. He had won the 2014 Assembly election from Gandhinagar constituency in Jammu. (Photo: Twitter | ANI)

Jammu: Five new faces from Bharatiya Janata Party (BJP) including Kavinder Gupta, former Speaker of the Jammu and Kashmir Assembly, were on Monday inducted into the Council of Ministers headed by Chief Minister Mehbooba Mufti, to keep its strength in the PDP-BJP coalition government static at 11.

The other new BJP faces who took oath of office and secrecy as ministers at the swearing in ceremony held in winter capital Jammu are Sat Paul Sharma (the State BJP president and MLA Jammu West), Rajiv Jasrotia (MLA Kathua), Dr. Devender Manyal (MLA Samba) and Shakti Parihar (MLA Doda). While Parihar has been inducted as Minister of State, all four others are Cabinet ministers.

The BJP also upgraded Sunil Sharma, at present minister of state for transport, to the rank of a Cabinet minister.

Kavinder Gupta is the new deputy chief minister of the State. He has replaced Dr. Nirmal Singh who resigned ahead of the much-anticipated Cabinet reshuffle. The BJP has also dropped Health and Medical Education Minister Bali Bhagat and Minister of State for Education and Tourism Priya Sethi.

Its alliance partner the Peoples’ Democratic Party (PDP) also inducted two of its known faces Mohammad Khalil Band and Mohammad Ashraf Mir, the MLAs elected from Pulwama and Sonwar (Srinagar) segments, respectively. The duo had served as ministers in the PDP-BJP combine earlier also when PDP patron Mufti Muhammad Sayeed was the Chief Minister. The PDP has dropped Abdul Haq Khan, the Minister for Rural development and Law to keep its strength at 14 as is permitted under the agreement reached between the two parties in 2015.

The State can have a maximum of 25 ministers, including the Chief Minister, out of which 14 portfolios are with the PDP and the remaining with the BJP.

The PDP had only one vacancy in the Council of Ministers following the unceremonious ouster of Finance Minister Dr Haseeb Drabu in March this year.

On the other hand, the BJP’s quota had dropped to nine after two of its ministers Choudhary Lal Singh and Chander Prakash Ganga were asked to resign amid controversy over their rallying behind the accused in the alleged gang-rape and murder of an 8-year-old nomadic Bakarwal girl at Rasana in Kathua district.

With the resignation of three more ministers including deputy chief minister Nirmal Singh on Sunday, its presence in the Council of Ministry had come down to six. With the induction of five news ministers, the party has kept its strength static at 11.

The party sources said that Nirmal Singh is likely to be nominated for the post of Speaker of the State Assembly in place of Kavinder Gupta while Bhagat may be appointed as new State BJP president.

Governor NN Vohra administered the oath of office and secrecy to the new members of the Council of Ministers at the convention centre in Jammu.

The swearing-in ceremony at which Chief Minister Mufti, BJP’s national general secretary Ram Madhav and Minister of State in PMO, Dr. Jitendra Singh, were also present was held at the convention centre instead of Raj Bhavan as the State government has already shifted its base to summer capital Srinagar as part of the bi-annual 'Darbar’ move, under which the government functions six months each in the twin capitals.

The Civil Secretariat, the seat of Jammu and Kashmir government, and Raj Bhavan closed in Jammu on Friday and will reopen along with other move offices in Srinagar on May 7.

Days after Forest Minister, Choudhary Lal Singh, and Industry and Commerce Minister, Chander Prakash Ganga, quit amid criticism over their publicly supporting the accused in the alleged gang-rape and murder incident, all the nine remaining BJP ministers in the PDP-BJP coalition government submitted their resignations to their State unit president to facilitate the major reshuffle in the Council of Ministers.

The six Cabinet ministers and three ministers of state belonging to the party who had submitted their resignations included Nirmal Singh (Deputy Chief Minister), Bali Bhagat, Chering Dorjey, Sham Lal Choudhary and Abdul Gani Kohli besides Sajad Gani Lone who was inducted into the Council of Ministers from the BJP quota and ministers of state Sunil Kumar Sharma, Priya Sethi and Ajay Nanda.

However, local watchers say that while Nirmal Singh who had supported the Chief Minister Mufti’s stand on Kathua incident has been dropped the party has patronised some of the hardliners by nominating them as ministers in the significant reshuffle.

Also inducting MLA Kathua Rajiv Jasrotia as a minister has come in for criticism from various people in the opposition and in social media. Civil society leader and noted Kashmiri businessman Syed Shakeel Qalander wrote on his Facebook timeline, "While taking credit for expulsion of two BJP ministers for attending Hindu Ekta Munch rally, how would PDP explain induction of Rajeev Jasrotia, MLA Kathua, who has been part of not only the controversial rally but also supportive of all such rallies and agitations in favour of the accused."

However, Ram Madhav BJP’s national General Secretary and its Kashmir pointsman said, "The Cabinet reshuffle has nothing to do with the Kathua incident. Our government has completed three years and we decided to give a chance to new faces."