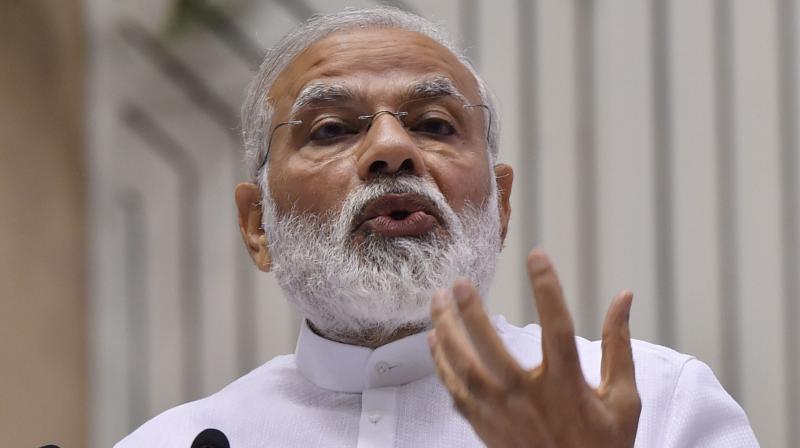 New Delhi: Prime Minister Narendra Modi urged Muslims on Saturday not to view the issue of triple talaq from a political perspective, in his latest push for a ban on the contentious practice on grounds of gender equality and justice.

While the sensitive issue is quickly getting politicised, the PM expressed confidence that “enlightened” members of the Muslim community would lead efforts to end the practice.

India’s Supreme Court is hearing petitions for a ban on triple talaq. The next hearing will be on May 11.

Speaking at a function to mark the Basava Jayanti celebrations in honour of Kannada philosopher Basaveswara, Mr Modi referred to the 12th century reformer’s movement against regressive practices to speak about triple talaq.

His comments come against the backdrop of the All India Muslim Personal Law Board (AIMPLB) promising reforms while resisting government interference in Sharia, that governs matters such as marriage and inheritance.

“I appeal to you not to view the triple talaq issue from a political perspective. Come out and find a solution. That solution will have its own majesty and generations will remember you,” Mr Modi said.

The push for a ban also looks to win support from Muslim women and chip away at an important bloc of voters that views Mr Modi with suspicion.

He called upon Indian Muslims to lead not just those from the community in the country, but to show the “path of modernity” to Muslims worldwide.

“That is the kind of power and energy this land gives to all of us,” he said to a thunderous applause.

The PM spoke about women’s empowerment, equality and good governance, as preached and practised by Basaveswara.

Earlier this month, the AIMPLB said that it would end triple talaq within 18 months, but demanded no interference from the government. The non-governmental body that oversees the application of Muslim personal law also claims to have received support on triple talaq from 3.5 crore Muslim women.

The event assumes significance in view of the 2018 Assembly elections in Karnataka, where Lingayats are a formidable community. Basaveswara, also known as Basavanna, is their most powerful icon.

The PM used the platform, hosted by the Basava Society, to repeat his government’s message of “Sabka Saath Sabka Vikas” and said people had to progress without discrimination.