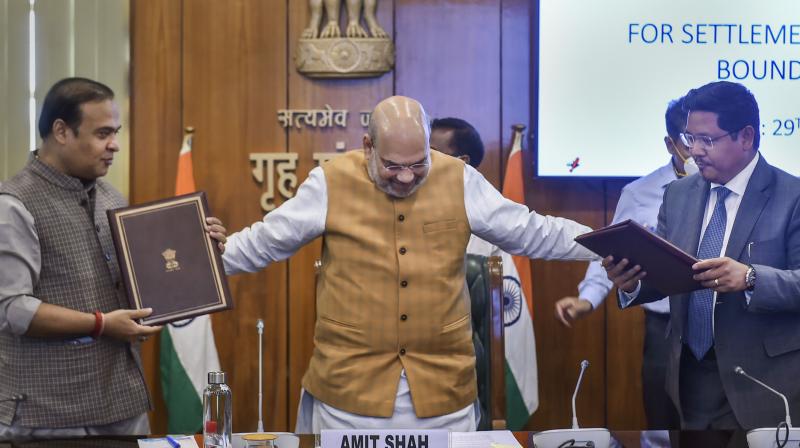 Guwahati: In a major breakthrough, Assam and Meghalaya on Tuesday signed a memorandum of understanding (MoU) in the presence of Union home minister Amit Shah in New Delhi to resolve five-decades old border disputes between the two states.

The chief ministers of Assam and Meghalaya, who signed the agreement at the office of the Union ministry of home affairs, announced that they have agreed to resolve the dispute at six of the 12 disputed locations in the first phase of agreement.

Congratulating the two chief ministers for resolving the dispute, the Union home minister said, “Today, a 50-year-old pending boundary dispute between Assam and Meghalaya has been resolved. Six out of 12 points of the dispute have been resolved, which comprise nearly 70 per cent of the boundary. The remaining six points will be resolved at the earliest.”

Assam chief minister Himanta Biswa Sarma who played the key role in resolving the dispute said, “It is a historic day for us. After this MoU, in the next six to seven months, we aim to resolve the issue of the remaining disputed sites. We will work towards making the northeast region a growth engine in the country.”

The chief minister of Meghalaya, Conrad K Sangma, told reporters, “Firstly I want to thank home minister Amit Shah for giving us the direction to resolve the border disputes in the North-Eastern states. Today the first phase of the resolution has been done. It could only be possible without Assam chief minister Himanta Biswa Sarma.”

Reiterating his commitment to resolve the dispute on remaining disputed sites, Mr Sangma said, “I also want to thank all members of the committee and the officers from both states.”

On January 31, the chief ministers of Assam and Meghalaya had submitted a draft resolution to the Union home minister for examination and consideration. The governments of the two states had come up with a draft resolution to resolve their border disputes in six of the 12 areas of difference along the 884-kilometre boundary.

In August 2021, Assam and Meghalaya had formed three committees to go into the vexed boundary question, following two rounds of talks between the two chief ministers during which the states resolved to settle the border dispute in a phased manner.

Meghalaya was carved out of Assam in 1972, and since then border dispute has afflicted the two neighbouring states. In the past several attempts to resolve the dispute had failed to yield any positive response.

Informing that Mr Shah has requested to resolve the border disputes with Arunachal Pradesh, Mizoram and Nagaland as well, Mr Sarma said that he had a meeting with the chief minister of Arunachal Pradesh where they formed a road map to settle 122 disputed points. He further said that initial discussions have started with the chief ministers of Mizoram and Nagaland too to resolve border disputes.