Between the two states, more than half-a-dozen of the recent positives travelled to a Tablighi Jamaat congregation in Old Delhi 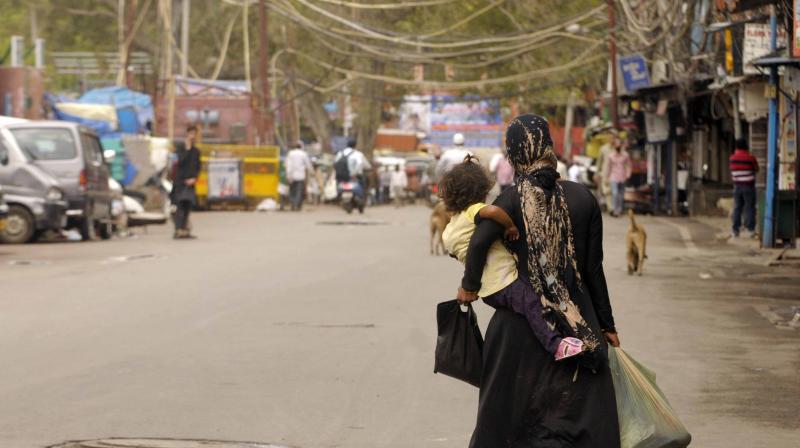 A woman returns home after collecting some essential items for her family in Old Delhi. A nationwide lockdown is in force because of the coronavirus outbreak in India. (DC Photo: Pritam Bandypadhyay)

Hyderabad: From the travel histories of some of the more recent Covid-19 carriers and patients detected in Telangana and Andhra Pradesh, New Delhi appears to have been the hub for transmission of the disease to the two Telugu states.

Between the two states, more than half a dozen Covid-19 patients reported travel history to New Delhi, where they came into contact with people involved with the Tablighi Jamaat, a loosely structured organization that works to educate Muslims on the Quran and prayer methods.

On March 26, the Telangana government announced that two of the four persons who tested Covid-19 positive that day had travelled to Delhi. On Sunday, during his press conference, chief minister K Chandrashekar Rao referred to some of the current patients in Telangana as having visited a mosque in Delhi. Just these two patients are believed to have transmitted the coronavirus to at least eight others in Hyderabad.

Similarly, Andhra Pradesh, over the past two days, also identified that three of its Covid-19 patients had connections to a religious meeting in Delhi. While two of these patients visited Delhi themselves, the third was a contact of one of these two patients. Yet another patient had travelled to Ajmer in Rajashtan and was found Covid-19 positive after returning to Andhra Pradesh.

It may be recalled that 10 Indonesian religious preachers, who were first found in Karimnagar town, subsequently tested positive for Covid-19. This group of 10 was among hundreds of other preachers who had gathered at the Tablighi Jamaat congregation in the old city of Delhi.

The central government too now believes that this gathering was a focal point of the spread of the disease into several parts of India, with preachers from Indonesia, and some from Malaysia, along with Indians who spent time with these groups of visiting preachers, as having formed a large infected group and could have spread the disease in several other parts of the country, where smaller groups of preachers then travelled to.