Having triggered the migrant exodus, the Centre now works the levers to stop it 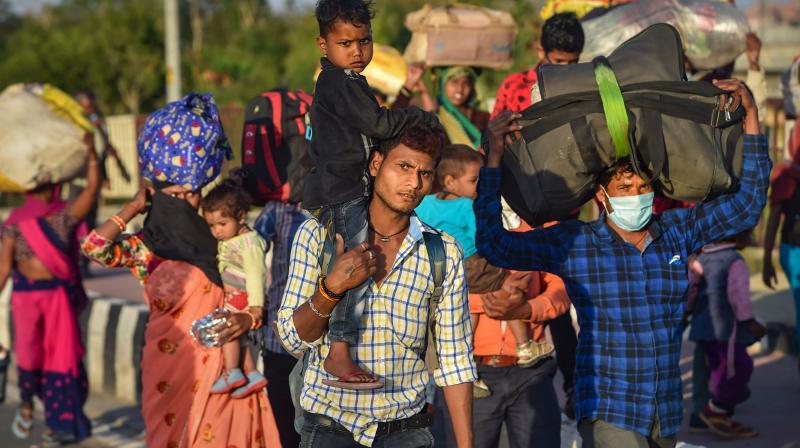 Migrant workers walk on NH 24 near Akshardham in East Delhi to go to their villages in Uttar Pradesh and Bihar. (PTI)

New Delhi: As India entered Day 5 of a 21-day lockdown, eight more Covid-19 deaths were reported from six states, taking the toll to 27 on Sunday.

On the positive side, of the 1,024 active cases, 95 patients have been cured and discharged. However, the spread of the highly contagious virus has more than doubled — from 75 districts to 160 — in the last six days.

In a bid to stop community transmission of the virus, the central government has ordered the sealing of state and district borders across India to discourage the movement of migrant workers, many thousands of whom have set out to return to their villages after the lockdown left them jobless.

The Centre said Sunday that all those violating the lockdown restrictions will be sent to 14-day quarantine. States have been directed to allow only the movement of essential commodities and stop people’s movement on highways or across cities.

The Prime Minister’s Office (PMO) has constituted 11 high-level committees to suggest measures to ramp up healthcare, put the economy back on track, and minimize the pain of people as quickly as possible.

With 203 cases, Maharashtra is the state worst hit by Covid-19, followed by Kerala with 182. In Telangana, the number rose to 66, including 10 foreigners, while Karnataka has reported 76 cases. In Tamil Nadu 50 people, including six foreigners, have tested positive.

Here's the the statewise breakup of corona+ cases:

On Sunday, the Centre issued fresh directions to all states and Union territories to strictly enforce the three-week lockdown. During a video conference with chief secretaries and DGPs, cabinet secretary Rajiv Gauba and Union home secretary Ajay Bhalla directed that district magistrates and SPs should be made personally responsible for the implementation of the lockdown.

The two top central officials told the chiefs of police and civil administrations of all states to make adequate arrangements for food and shelter for poor and needy people, including migrant workers at their place of work. The central government has already issued orders allowing the use of State Disaster Response Force (SDRF) funds for this purpose.

The states have been told to ensure the timely payment of wages to workers at their place of work during the lockdown without any cut.

They have been directed to ensure that even house rent is not demanded from labourers for this period. They have also sought action against anyone who asks labourers or students to vacate their homes.

Meanwhile, Union Minister Jitendra Singh said that cargo flights will be used exclusively for transporting medical equipment and emergency goods, besides other essential items to the northeastern states, in the wake of the countrywide lockdown due to the coronavirus outbreak.