The nationwide lockdown, that has now completed six days, is helping contain the fast rise of fresh cases 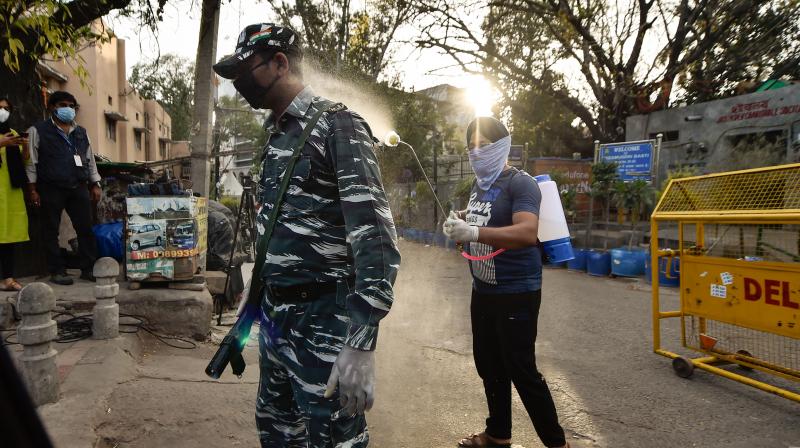 A volunteer sprays disinfectant on paramilitary personnel as they cordon off an area in Nizamuddin, where several people showed symptoms of infection from coronavirus after taking part in a religious gathering a few days ago, during the nationwide lockdown, in New Delhi on Monday. PTI image

The number of novel coronovirus cases in India went up to 1,242 on Monday, with 35 deaths reported so far and 111 persons cured.

The government sees the recovery of 10 per cent of patients as a positive sign, and is keeping its fingers crossed as death rate remains 2.8 per cent of the total infected.

Prime Minister Narendra Modi said India had taken “unprecedented and early steps” in response to this pandemic from mid-January to reduce the risk of importing the infection, and thereafter to prevent a large outbreak.

“It took 12 days for cases to rise from 100 to 1,000 in India, whereas seven other developed nations with lesser population than us have seen multiple increase in positive cases. The lockdown has slowed down the virus spread, that is a positive result of the lockdown, but it is a daily battle,” said Lav Agarwal, joint secretary in the health ministry, said amid speculation that the 21-day lockdown may be extended.

While the Cabinet Secretary dismissed this speculation, officials say a decision will be taken based on the situation.
The government is taking solace that out of 38,442 people tested so far, only 1,242 tested positive. It is, however, facing criticism for testing fewer people.

Officials said with the private sector joining in, the screening will increase. The private sector has tested 1,334 so far, and no positive cases were detected. This makes the government believe the transmission is not at the community level.

“So far we are managing it well. Of the total patients in hospitals, a substantial number is recovering well while the percentage of patients whose condition is serious is very little,” Mr Aggarwal added.

Officials said the lockdown has given the government time to prepare for bigger challenges once the curbs are lifted. This includes making available PPEs, ventilators and dedicated Covid hospitals. The world over, 43 companies have begun vaccine trials. The efficacy of the 100-year old vaccine for tuberculosis is also being tested as a Covid-19 vaccine.

The Centre has constituted a committee to look into speedy decisions on research and development on the Covid-19 disease. All government institutes and many private labs have been asked to prepare for research and testing. They have also been asked to be ready for testing large volumes of patients.

“The government is working proactively with private sector labs for large scale Covid-19 testing. This will allow surveillance and clinical research to manage and control the spread of the virus,” officials said.

Questions are also being raised over the efficacy of hydroxychloroquine as an effective drug against Covid-19 after a 44-year-old doctor in Assam died of cardiac arrest.

The doctor had taken the medicines as a prophylactic. However, the head of epidemiology and communicable diseases at ICMR, Dr Raman R. Gangakhedkar, said the possibility of the doctor dying due to the medicines is little. less. But an article in the Mayo Clinic Proceedings said the drug could induce cardiac arrest.