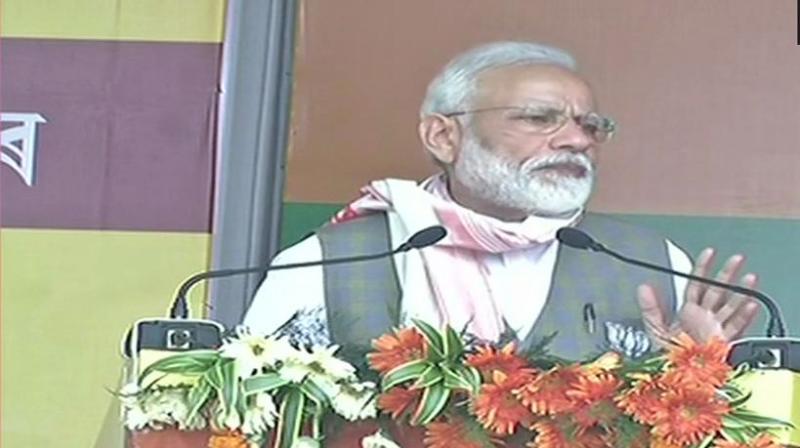 Modi said Assam, where only 40 per cent homes had power and gas connections till several decades after independence, now has electricity and cooking fuel in almost every home. (Photo: ANI)

Assam: Prime Minister Narendra Modi said on Saturday that Assam and the rest of the Northeast were suffering from infiltration due to the policies of the Congress government in the 1970s.

Addressing a BJP rally in Gohpur, his second in the state on Saturday, Modi said the youth should ask the elderly to find out how the Congress betrayed Assam time and again.

"Will people of Assam support those that are working against the interests of the country? They do not favour progress of our country, will they care about Assam's development?" he asked as he sought support for his party in the April-May Lok Sabha election.

Congress always cheated people, but the 'Chowkidar' will fight against infiltration, terrorism and corruption, Modi said. In the interest of the nation, it was the Jan Sangh and tall leaders such as Atal Bihari Vajpayee, who had raised their voice in support of Bangladesh during its independence movement, the prime minister said. Indira Gandhi was the prime minister of India in 1971 when Bangladesh became independent from Pakistan.

Speaking about his government's achievements. Modi said, "This chowkidar has launched the 'PM Shram Yogi Mandhan Yojana' for people working in the tea gardens, those associated with the scheme will get a regular pension of Rs 3,000 per month after the age of 60."

In the first rally in Assam, Prime Minister Narendra Modi Saturday asserted that the NDA government is committed to the Assam Accord and mulling granting Scheduled Tribe (ST) status to six communities in the state.

The Assam Accord provides for deportation of all illegal immigrants who entered Assam after March 1971, irrespective of their religion.

The Centre is trying its best to implement the Assam Accord that was suspended by the Congress, Modi said. "We have made efforts to protect the people of Assam, its culture and interests. The NDA is seriously considering granting ST status to six communities -- Tai Ahom, Muttock, Moran, Chutiya, Koch Rajbongshis and the tea tribes," he said.

Lashing out at opposition Congress, he said Assam, where only 40 per cent homes had power and gas connections till several decades after independence, now has electricity and cooking fuel in almost every home.

"The way you have supported me, blessed me, it has boosted my confidence to do better work for the underprivileged, poor and the tribal population. Barring the Congress and the terrorists, everybody is happy with the BJP government," Modi said.

Listing his government's achievements, he said over five lakh people in Assam have been given homes by the NDA govt, 27 lakh families have received health insurance of Rs 5 lakh each and farmers have been given aid to take care of their regular expenses.

Addressing the tea belt communities, Modi, who used to sell tea at a railway station in his early years, said "only a 'chaiwala' (tea seller) can understand the pain of fellow 'chaiwalas'".

"This 'chaiwala' is committed to improve the condition of the tea gardens and its people in both Assam and West Bengal," he added.

Modi also asserted that the northeast has the power to become a new India's energy hub and the government is working hard to develop the region to realise this dream.

The prime minister, who paid tribute to legendary musician Bhupen Hazarika prior to his speech, said, "The government is committed to protect the rights, culture and interests of the indigenous people of this region".