India   All India  30 Mar 2019  EC issues notice to Railways on use of cups with 'main bhi chowkidar' slogan
India, All India

As the image tweeted by a passenger went viral, railways said they have withdrawn the cup and penalised the contractor. 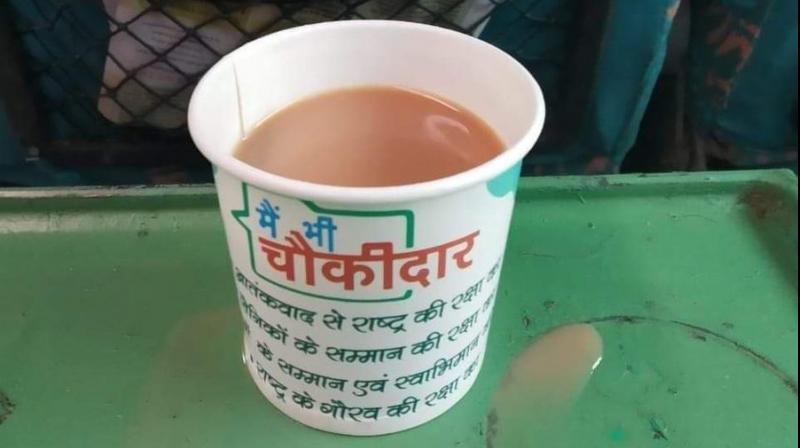 As the image tweeted by a passenger went viral, railways said they have withdrawn the cup and penalised the contractor. (Photo: Twitter | @payalmehta100)

New Delhi: The Election Commission is learnt to have issued a fresh show cause to the Railways, this time on the use of paper tea cups with "main bhi chowkidar" slogan.

As the image tweeted by a passenger went viral, railways said they have withdrawn the cup and penalised the contractor.

EC sources said Railways have been asked to explain the prima facie violation of the model code of conduct by Saturday evening.

It has also been asked to explain the person responsible for it. The EC is learnt to have invoked the 'party in power' clause of the poll code in the case as it could be averred that party in power' is using government transporter for election publicity.

"Reports that tea has been served in cups labelled as 'main bhi chowkidar' have been investigated. This was without any prior approval of IRCTC. Explanation has been sought from Supervisor/Pantry Incharges over lack of devotion to duty. One lakh fine has been imposed on the service provider. Show cause notice has also been served to the service provider for this misconduct," said IRCTC in a statement on Friday.

This particular cup was found on board 12040 Kathgodam Shatabdi. Tea was served twice in these cups. This issue comes days after railways was found in violation of the MCC when it was found to be issuing tickets with PM Narendra Modi's pictures. Later, railways said that it was an ''unintentional and inadvertent mistake".