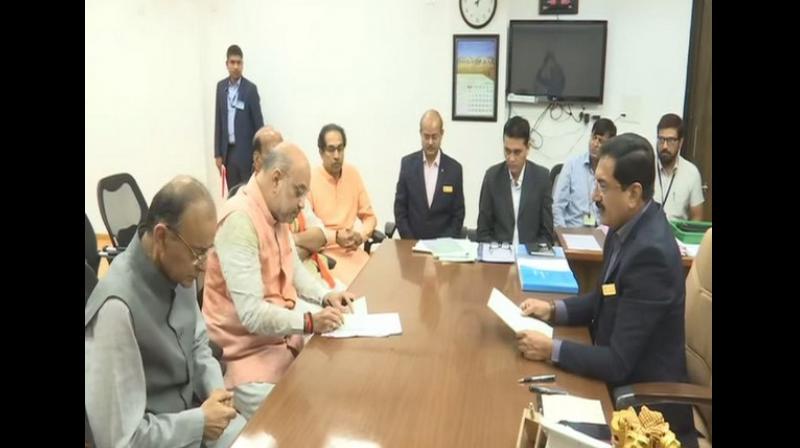 Earlier in the day, Shah addressed a rally with the National Democratic Alliance leaders and conducted a roadshow in Ahmedabad. BJP patriarch L K Advani had represented the Gandhinagar Lok Sabha seat for the last six terms.

Expressing deep gratitude to the Bharatiya Janata Party for making him what he is today, BJP president Amit Shah on Saturday said that he will be left with a 'zero' if association with the party is taken away from his life.

The BJP president made this statement before filing his nomination for the Gandhinagar parliamentary constituency, a seat which was last represented by senior leader L K Advani.

Shah is contesting the Lok Sabha elections for the first time.

"If BJP is taken away from my life, only 'zero' will be left. Whatever I have learnt and given to the country all belongs to the BJP," Shah said while addressing a rally at Naranpura area of Ahmedabad, prior to filing his nomination. Advani was not present at the rally.

"Lal Krishna Advani and Atal Bihari Vajypayee ji were MPs from Gandhinagar. I am glad that a have got an opportunity to become MP from the same constituency. BJP is a party with ideology. It is a party, which is moving forward on the principles of Deen Dayal ji," he added.

Hailing Shah as India's biggest campaigner and organiser at the rally, SAD patriarch and former Punjab Chief Minister said: "Gujarat people you're so lucky that BJP president and Prime Minister Narendra Modi are from your state. Amit Shah is not a human, he is an institution.He is India's biggest campaigner and organiser. Shah is a grass root leader who has served the Assembly for long."

Appealing Gujarat to vote in favour of Shah and help him in winning with a record margin, Union Minister Nitin Gadkari stated that "not only people of Gujarat but the whole country has developed faith in Amit Shah".

The leaders of BJP's allies including Shiv Sena chief Uddhav Thackeray said: “Some people must be surprised to see me here. Some are happy but others have a stomach ache over it. Whatever we do we do with the heart. Whatever issues we raise are of people.  We had some differences but we have never stabbed anyone in the back and nor will do it. We do not have any such culture.”

"Mahagathbandhan has been converted into Lathbandhan and Congress is nowhere in the country," LJP founder Ram Vila Paswan said and claimed that BJP will win more seats this time than 2014. "This time there is no vacancy for the Prime Minister, the Opposition can think about 2024," he added.

Praising Prime Minister Narendra Modi for putting immense efforts to develop the country and bringing several welfare schemes for poor, Union Home Minister Rajnath Singh stated: "India has taken a big leap in the world stage; all credit goes to Prime Minister Narendra Modi. And then people like Rahul Gandhi say 'Chowkidar Chor Hai'?He appealed people to come together and convey a message to Rahul Gandhi that "Chowkidar chor nahi hai, chowkidar pure hai" (The watchman is not a thief, he is pure)."

Polls for 26 Lok Sabha seats in Gujarat will be held in a single phase on April 23. The counting of votes will take place on May 23.