All the dancers chose to highlight the poetry of essentially women bhakti poets including Meera Bai, Lal Ded, Gangasati and Jayadeva. 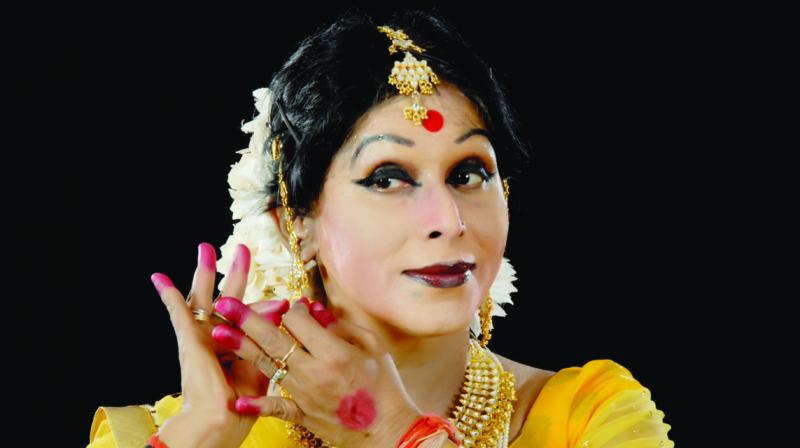 The last few weeks, I have been involved in a very intense process of being a part of Eternal Quest, a very special programme of classical dance based on the works of women poets from the Bhakti movement by three prominent women danseuses of country. The dancers are Shovana Narayan (Kathak), Ranjana Gauhar (Odissi) and Rashmi Vaidialingam (Kuchipudi) and yours truly, the sutradhar.

All the dancers chose to highlight the poetry of essentially women bhakti poets including Meera Bai, Lal Ded, Gangasati and Jayadeva. All the four poets are from the Bhakti movement that had its genesis in the South of India in the 6th century. It is characterized by the writings of its poet-saints, many of whom were female, that extolled passionate inner, mystical, and highly personal devotional love for the divine and chose to express themselves in the vernacular languages as opposed to Sanskrit. The Bhakti Movement gained momentum from the 12th centuries in the central western regions of India, it moved northward, coming to an end roughly in the 17th century.

It is interesting that many of the bhakti poet-saints rejected asceticism as the crucial means toward liberation; some bhaktas were instead householders. Themes of universalism, a general rejection of institutionalised religion, and a central focus on inner devotion laid the groundwork for more egalitarian attitudes toward women and lower-caste devotees. Women and shudras, both at the bottom of the traditional hierarchy ordering society, became the examples of true humility and devotion. For many, their critique also included the caste system that supported the traditional religious hierarchy, with Brahmins at the head of this hierarchy.

Kathak maestro Shovana Narayan danced to poetry of Lal Ded (1320–1392) and Gangasati (perhaps 13th or 15th century) who were both women saint poets revered by the people of Kashmir and Gujarat, respectively. “The Vaks of Lal Ded stem from personal experience, conveying the realisation that the divine resides within, expressing her yearning and irritation with the divine in turn. Lal Ded, though a Shaivite, yet she sees the nirakar and nirguna swaroop (the beyond form, infiniteness) of Shiva. Lal Ded who had an unhappy married life, a jealous husband and an ill-treating mother-in-law, walked out of her marriage defying social norms,” says Shovana.

The supreme is omnipresent, she sang, the Hindus called her Lalleshwari and the Muslims Lalla Arifa, but both endearingly called her Lal Ded (grandmother). Lal Ded rebelled against prevailing social norms, rejecting rituals in favour of meditative devotion, revolting against the powerful clergy of the times who had transformed these rituals into a means of exploitation, questioning the secondary status of women and advocating equality for all, she demystified Shaivism by composing in the language of the common people, making its tenets accessible to all.

Shovana turns to the Gujarati poet Gangasati’s bhajans written for her daughter-in-law, Panbai, advocate the path of self-realisation through their good karma and meditative devotion to delineate the path of spiritualism. In stark contrast to Lal Ded was Gangasati, who was a happily married woman, with a devotional bent of mind and spirit who even converted her husband to the path of realisation.

Similarly, Gangasati’s bhajans do not mention any specific deity but refer to god as nirguna, without form or attributes, yet there are allusions to Hari. “Both Gangasati and Lal Ded speak of going beyond idol worship, of dissolving the “I” within, and finding ecstasy in merging the self with that of the para Brahman residing within. It is this aspect that forms the basic core of my presentations,” says Shovana.

The imagery of bhakti poetry is grounded in the everyday, familiar language of ordinary people. Women bhaktas wrote of the obstacles of home, family tensions, the absent husband, meaningless household chores, and restrictions of married life, including their status as married women. In many cases, they rejected traditional women’s roles and societal norms by leaving husbands and homes altogether, choosing to become wandering bhaktas; in some instances they formed communities with other poet-saints. Their new focus was utter devotion and worship of their Divine Husbands.

Moksha, or liberation from rebirth, was not in the following of rules, regulations or societal ordering; it was through simple devotion to the Divine. And the epitome of this yearning was Meera Bai the 15th Century Sisodia princess from Rajasthan. Kuchipudi exponent Rashmi Vaidialingam dances to Meera’s well-known bhajan Chalo Man Ganga Jamuna Teer where Krishna’s ostensible playful antics in hiding the gopis’ clothes as they bathed is in fact the Lord’s attempt to show them the path of surrender to the Divine. Krishna appears and commands them to bow their heads in complete surrender. Initially the Gopis resist but when they hear Krishna’s flute, they fall at his feet in complete surrender and devotion, leaving aside their egos.

Within the movement at large, useful distinctions have been made by contemporary scholars between those poet-saints who composed verses extolling God with attributes or form, namely, “saguna” bhaktas, and, those extolling God without and beyond all attributes or form, “nirguna.” “While the differences between the two branches of Nirgun and Sagun bhakti are indeed important, their overarching similarities cannot be minimized; both focused on singular devotion, mystical love for God, and had a particular focus on a personal relationship with the Divine,” says Rashmi.

Odissi danseuse Ranjana Gauhar is suffused with love as expressed in the Gita Govindam a love song written by celebrated Saint poet Jayadeva in the 12th century that has constantly inspired writers, poets and artists alike. She dances to Sakhi Hey Keshi Mathan Mudaram, the sixth Ashtapadi where Radha and Krishna are the vehicles for the universalization of emotions. Krishna represents the divine and Radha the soul yearning to be united with the supreme Divine. “This excerpt describes Radha as abhisarika nayika who is smitten by the cupid’s arrows and is entreating her sakhis to bring her to Krishna so that she can be united with him,” says Ranjana.

Female poet-saints played a significant role in the Bhakti movement at large. Nonetheless, many of these women had to struggle for acceptance within the largely male dominated movement. Only through demonstrations of their utter devotion to the Divine, their outstanding poetry, and stubborn insistence of their spiritual equality with their contemporaries were these women reluctantly acknowledged and accepted within their ranks. Their struggle attests to the strength of patriarchal values within both society and within religious and social movements attempting to pave the way for more egalitarian access to the Divine.

I feel the core of all our classical dance is Bhakti. It is the quest for the atma to become one with the parmatma – even if it is for a minuscule moment is eternal. I think all creative artists spend entire lifetimes in search of that moment. I feel, for those of us who are seeking adhyatmic sukh or spiritual bliss, our quest is eternal.

Depending on which state we come from, all of us have grown up hearing one or the other composition, bandish or bhajan written by a poet of the Bhakti kaal. From Lal Ded in Kashmir to Andal in Tamil Nadu to Akka Mahadevi in Karnataka to Meera to Kabir to Tukaram to Jaydev — it is a long and a very meaningful list. In a sense the beautiful words and emotions of some of these creative poets are a part of our genetic memory.

While male bhaktas could engage in this role-playing on a temporary basis, meaning they could return at will to their privileged social status as males. Women bhaktas on the other hand, faced crushing challenges if they rejected societal norms and values. They didn’t have the privilege to revert back to their roles as wives, mothers and in some cases, their original high-caste status – Meera being a case in point.

While it is tempting to see women’s participation within the bhakti movement as a revolt against the patriarchal norms of the time, there is little evidence to support this. Injustices and the patriarchal order itself were not a major focus of these poet-saints. Sadly enough, the movement’s northward advancement during the 15th to 17th centuries, lost its radical edge to women’s inclusion.

My experience as an art writer, artist and curator has given me the benefit of having an extremely interesting overview of the arts. I have been blessed to experience many arts closely.  When I watched these three friends of mine dance, I asked myself: What am I doing here? And the answer was: We are same in our quest. Because while they dance to invoke their Krishna, my Krishna comes to dance in the lines and colours of my canvases. Radhe Radhe.

Alka Raghuvanshi is an art writer, curator and artist and can be contacted on  alkaraghuvanshi@yahoo.com