NCP will never support BJP and compromise on secularism: Pawar

Speculation was rife that it could look at NCP to fill the crucial gap ahead of civic polls in Mumbai and other places in Maharashtra. 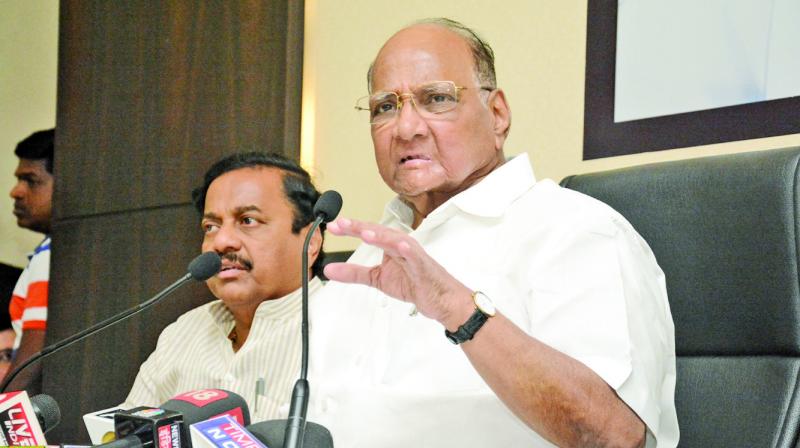 Panaji: Nationalist Congress Party (NCP) supremo Sharad Pawar has scotched rumours that his party was cosying up to BJP, saying it will never support the saffron party nor join hands with communal forces and compromise on secularism.

"There are rumours being spread that NCP is growing close to BJP. This is absolutely false news. NCP will never support BJP," he said addressing a public meeting in Vasco last night where he was canvassing for his party candidate Jose Philipe D Souza.

With Shiv Sena chief Uddhav Thackeray calling off their two-decade-old alliance with the BJP, speculation was rife that it could look at NCP to fill the crucial gap ahead of civic polls in Mumbai and other places in Maharashtra.

During the public meeting last night, Pawar slammed Prime Minister Narendra Modi over the demonetisation holding him responsible for generating unemployment in the unorganized sector and spelling doom on various sectors including the power loom industry.

He accused PM of having taken the demonetisation decision to "misguide" and divert the attention of the people from his failure to bring back black money from abroad.

"The PM overnight terminated a lot of currency and within a day, the entire country was standing in queues outside banks," he said.

The former Union Minister also lambasted Manohar Parrikar for closing down mining industry in the state after he took over the reins in 2012 as the CM.

"People who were dependent on the mining industry were forced to face a bleak future with one decision of Parrikar," he said.