The basic idea of these exercises was to ask all the poor people whether or not they were Indian, Rahul Gandhi claimed. 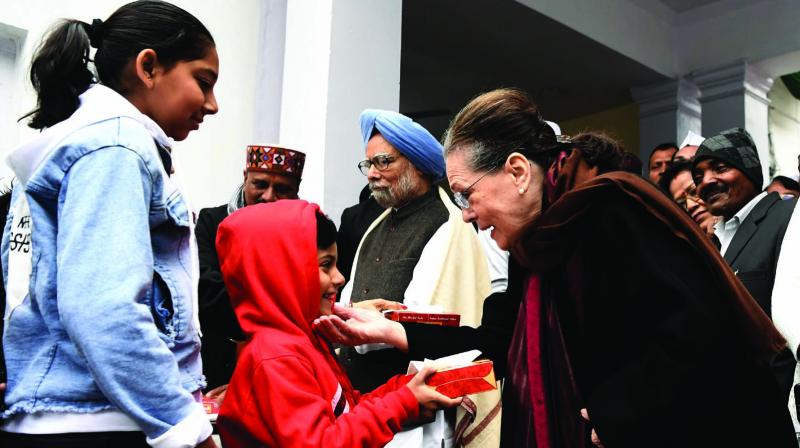 New Delhi: Thousands of Congress workers took to the streets in the capital as well as in cities like Mumbai, Kolkata and Jaipur to protest the Citizenship Amendment Act (CAA) even as former party president Rahul Gandhi continued his attack on the Modi government, terming the proposed National Register of Citizens (NRC) as “notebandi 2”.

Congress workers, participating in activities planned for the party’s 135th foundation day, undertook flag marches across the country to propagate the message of “Save Constitution – Save India”, Congress leaders said here.

Participating in the event at the AICC headquarters in Delhi, Mr Gandhi, who is tipped to return as party president soon, termed CAA and NRC as “notebandi 2” and warned that these would be more disastrous than demonetisation.

The basic idea of these exercises was to ask all the poor people whether or not they were Indian, Mr Gandhi claimed.

“This whole tamasha that is going on is ‘notebandi number 2’. This will be more disastrous for the people than demonetisation. This will have twice the impact of demonetisation. His (Prime Minister Narendra Modi’s) 15 friends will not have to show any documents and the money generated will go into the pockets of these 15 people,” he said.

On Friday, the BJP had hit out at Mr Gandhi over similar comments and labeled him a liar. Reacting to the same, Mr Gandhi targeted the PM over his remarks that there were no detention centres in the country.

Later addressing a rally in Assam, he said, “I am telling you in unambiguous terms that we shall not allow the BJP and RSS to attack the history, language and culture of Assam. Assam will not be administered from Nagpur.”

“It is not only Assam but the entire North East which has its own history, languages and culture. BJP has failed to understand you (the people of Assam) and of the North East…” he said.

Mr Gandhi said that his party had clearly stated in Parliament that it would not allow the CAA to be passed.

“We shall not allow any attack on Assam and the North East people and I would like to assure that no Indian citizen will be allowed to be affected by this Act,” he said.

Mr Gandhi’s sister and Congress general secretary in-charge of Uttar Pradesh, Priyanka Gandhi Vadra, too, participated in the foundation day function at the party office in Lucknow and said that at present, the party was fighting against an ideology against which it had fought during the freedom struggle.

“Today in the country, there are such powers in the government with whom we had a historical clash. We are at present fighting an ideology against which we had fought during the freedom struggle. Today, the country is in trouble. If we do not raise our voice, we will be proved to be cowards,” she said.