Paradise fails to attract tourists due to violence, negative publicity 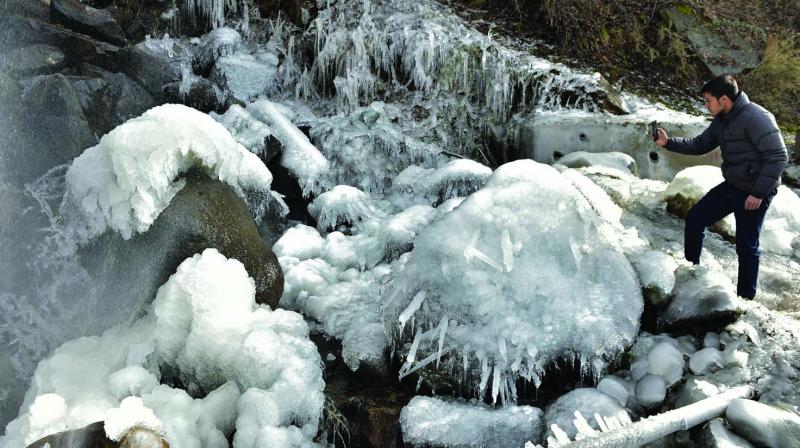 A tourist takes photos of icicles formed after snowfall at Pahalgam in Anantnag district of south Kashmir.

SRINAGAR: The stakeholders in Kashmir’s tourism industry had expected that 2018 would see large crowds of holidaymakers from different parts of the country and abroad coming to the Valley.

But once again Kashmir tourism failed to provide the stimulus which they had hoped it would. To their disappointment, 2018 too turned out to be another dismal year for Kashmir tourism although the officials concerned seek to present a rosy picture of the overall situation. According to them, over 8,00,000 domestic and 50,000 foreign tourists visited Kashmir during 2018.

Many private tour operators are, however, extremely sceptical of the figures, pointing out that these are customarily compiled from data collected at airports, bus terminuses and railway stations and the arrivals include 2,85,006 Amarnath pilgrims, regular travellers, traders, seasonal labourers and even beggars.

“The official figures are greatly exaggerated. If you ask us, not more than 2,70,000 tourists — both domestic and foreign — besides 2.85 lakh Amarnath pilgrims visited the Valley in 2018,” said Rauf Tramboo, a well-known tour operator.

The earnings from tourism are one of the most significant components of Jammu and Kashmir’s economy. Tourism contributes towards eight per cent of the state’s GDP and the state employs over 100,000 people directly and many more indirectly in the industry. Sadly, the industry is going through tough times for quite some time now.

It is generally believed that nothing has hit the tourism in Kashmir harder than the deteriorating law and order situation for three years in a row.

The killing of popular militant commander Burhan Wani in July 2016 pushed the Valley into a prolonged chain of violence and 2018 in particular has been the bloodiest year for the state since 2008. As many as 441 people have lost their lives in militancy-related violence, so far, during the year. The toll stood at 384 in 2017 and at 247 in 2016 whereas over 500 people had died in 2008.

However, there are other factors including negative publicity and global slowdown and financial and economic distress back home which have impacted  tourism in Kashmir. Most of the domestic tourists who visited the Valley during 2018 belonged to the southern states of Karnataka, Kerala, Tamil Nadu and partly Telangana. Foreign arrivals comprised tourists mainly from Malaysia, Thailand and Bangladesh. “The reasonable number of arrivals from southern parts of the country proved helpful in otherwise distressing situation.  We were expecting relatively higher influx from Gujarat and Maharashtra but then we learnt that people in these states are being discouraged from visiting Kashmir,” said Mr Tramboo.

He claimed that the tour operators of these two states informed their Kashmiri counterparts that they are under tremendous pressure and were even being issued threats by certain quarters including political activists for selling Kashmir to potential holidaymakers. “They told us that because of the coercion they had to remove Kashmir vintage tourism posters from their offices,” he said. The major obstacle to tourist arrivals from Europe, the West and Oceania are the travel advisories issued by many countries asking their citizens to avoid visiting restive Kashmir. Germany is the only country which not only  withdrew such advisory and officially recommended travel by its citizens to Kashmir but also offered to work towards changing the negative perception created about safety of tourists while visiting the Valley. Recently, a parliamentary panel — the Committee on Development of Tourism in Jammu and Kashmir — expressed worry over the “negative publicity” which it cited as a major hindrance to increasing footfall in the state.

Its report said, “This perception overshadows the true narrative of the region as not all parts of the state are in conflict or affected by it.” The committee recommended that the tourism ministry should organise its own publicity campaign “in order to remove the negative impression of the state which is based on incorrect facts”.

It also stated that the tourism ministry should involve the ministry of information and broadcasting and the external affairs ministry for the removal of advisories imposed by various countries against travel to the state.

It also said that the Goods and Services Tax has had a negative effect on tourism in the state and asked the government to reconsider the indirect tax regime on tourism-related activities in the state.

The committee in its report said that sourcing of products and materials is an issue in the state and quoting stakeholders added that unlike other states, residents of J&K and its business owners spend huge amounts of money on procuring essentials, most of which have to be flown in, which increases their capital expenditure.

It said that J&K’s “sensitive nature” must be taken into consideration during the development of tourism in the state and that the implementation of GST on tourism will have manifold effects, mostly negative, on its economy.

Governor Satyapal Malik has also admitted to Kashmir being demonised by the national media. Expressing his displeasure over the “negative portrayal” of Kashmir, he said last week, “In Delhi, Kashmir is being demonised (by the media). Everything on Kashmir is shown in bad light. If there is one death taking place in Kashmir, it is national headline.” Drawing a parallel between his home state of Uttar Pradesh and the Valley, he also said that no one knows about five to 10 bodies lying in mortuaries daily in (UP), but a single incident of death in Kashmir becomes national headline.

Governor’s advisor Khurshid Ahmad Ganai is, however, optimistic about things changing for better in the coming times. He said the government will provide all possible assistance to the tourism stakeholders in their efforts to project Kashmir as world’s top tourism destination. Stating that J&K is the safest place for travellers, he said, “People must visit the state. It offers diverse tourism products and unmatched beauty.”

He also said that during his recent visit to New Delhi, he requested the Central government to make efforts to promote J&K tourism at national and international levels.