On day 17, only 3 helmets recovered, no sign of trapped Meghalaya miners

The Indian Navy joined the operation to rescue 15 miners in the East Jaintia Hills district in Meghalaya. 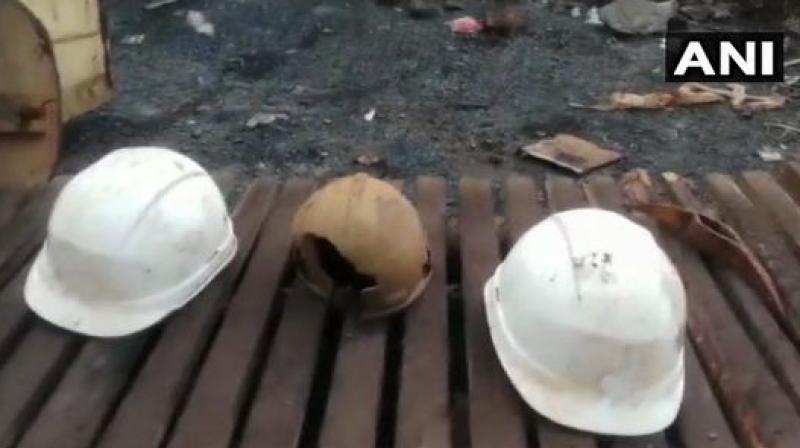 The rescuers recovered three helmets, which are suspected to be of the miners. (Photo: ANI)

Guwahati: The ongoing rescue operation, which was suspended for two days on Saturday resumed at war scale. The Indian Navy divers armed with special diving equipment including re-compression chamber and remotely operated vehicles capable of searching underwater, joined the operation to rescue 15 miners in the East Jaintia Hills district in Meghalaya.

Amidst the speculations on bleak chances of survival of miners trapped in a tunnel like space under 70-feet water, the rescuers recovered three helmets, which are suspected to be of the miners.

However, family members of those trapped are still hopeful that miners would be taking shelter in wind-chambers inside the tunnels.

The Navy divers started preparations to navigate the rat-hole coalmines to descend into the coal pit where 15 miners are suspected to have been trapped in some wind pockets.

Sources engaged in the rescue operations told The Asian Age that biggest challenge before the rescue team is to navigate the rat-hole mines, as there is no information or map available about the tunnels in which mining activities were going on.

Meanwhile, the state administration was also accused to have failed in coordinating the movement of the rescue team, which landed at Guwahati Airport on Friday.

The chief fire officer of Odisha Sukant Sethi, who is leading 21-member team of rescuers said, “Initially we were told that we would be travelling by trucks. Then the plan was changed and it was decided that dumpers would be used to shift the equipment to the accident site.”

He regretted that by the time they reached a primary school (located 25 km from the mine) where they were supposed to spend the night it was very late and no body was there to help them with basic needs.

“There was no food, blankets or beds for the men to take few hours of rest. We are not used to such cold temperatures in Odisha and had to rush for our mission without carrying enough warm clothes and bedding,” he added.

The team of rescuers is carrying 10 high-powered pumps to flush out water from the mine.

Informing that they have already started work, he however clarified that even after all these logistic challenges, they have started work on installing pumps to flush out water.

He said that Indian Navy divers are also working out strategy in consultation with experts of the Coal India.

The 15 miners have been trapped in a 370-feet deep illegal rat-hole mine in Lumthari village since December 13, when water from the nearby River Lytein flooded the mine.

Meanwhile, a six-member team of the Opposition Congress in Meghalaya visited the site and found several lacunae in the arrangements made by the district administration.

The legislators led by Ampareen Lyngdoh expressed surprise over district magistrate FM Dopth going on leave in spite of the tragedy of such a scale.

"Precious lives are at stake but the officer in-charge of the rescue operations has been allowed to go on leave," she said, demanding that the district magistrate be immediately recalled.