According to sources, others who were injured in the incident were rushed to the King Edward Memorial Hospital and the Sion Hospital. 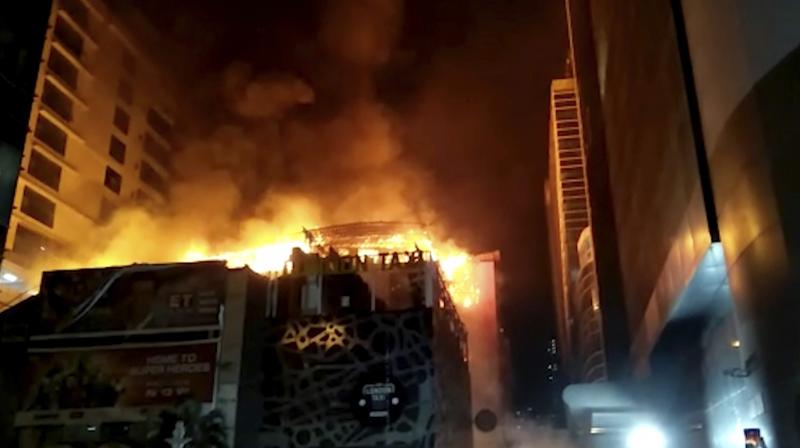 The fire broke out shortly after midnight on the third floor of the four-storeyed building on Senapati Bapat Marg, a commercial hub of the city, a civic official told PTI. (Photo: AP)

Mumbai: At least 14 people were killed after a massive fire broke out at a building in Kamala Mills Compound in the Lower Parel area of Mumbai.

Majority of those killed are women, according to civic authorities.

According to reports, a 28-year-old woman celebrating her birthday was among those who died.

Several others were injured in the incident and were rushed to the King Edward Memorial (KEM) Hospital and the Sion Hospital.

The doctor who performed the postmortems said that all the 14 deaths were due to suffocation.

'Postmortem reveals that all the 14 deaths were due to to suffocation,' Dr Rajesh Dere said.

The fire broke out shortly after midnight on the third floor of the four-storeyed building on Senapati Bapat Marg, a commercial hub of the city, a civic official told PTI.

The building, in Central Mumbai, houses some commercial establishments including hotels.

According to the official, the cause of the fire is yet to be ascertained.

An FIR has been registered against the restaurant '1 Above' where the fire initiated in Mumbai's Lower Parel locality.

The case has been filed under setion 304 (charges of culpable homicide) of the Indian Penal Code (IPC).

Transmission of the television channels ET Now, Mirror Now, Zoom and TV9 Marathi were affected due to the fire.

President Ram Nath Kovind expressed his condolences to the bereaved families. The President also commend the valiant efforts of fire-fighters and those in rescue operations.

Disturbing news about the fire in Mumbai. Condolences to the bereaved families and wishing the injured an early recovery. Commend the valiant efforts of fire-fighters and those in rescue ops #PresidentKovind

Soon after the incident President of Yuva Sena Aaditya Thackeray took to Twitter and called the incident "unfortunate".

Aaditya also said that the Brihanmumbai Municipal Corporation (BMC) will come down hard on the violations of fire saftey norms.

I spoke to Hon’ble Municipal Commissioner Mehta sir, MLA Sunil Shinde ji and Leader of the House Yashwant Jadhav ji, who were at the place assisting relief ops. Implementing fire audits of such places are a must, and action will be taken if violations are found.