'If Jadhav’s condition is such, in what state would have other Pak prisoners survived for so long' asked Vinod Sonkar. 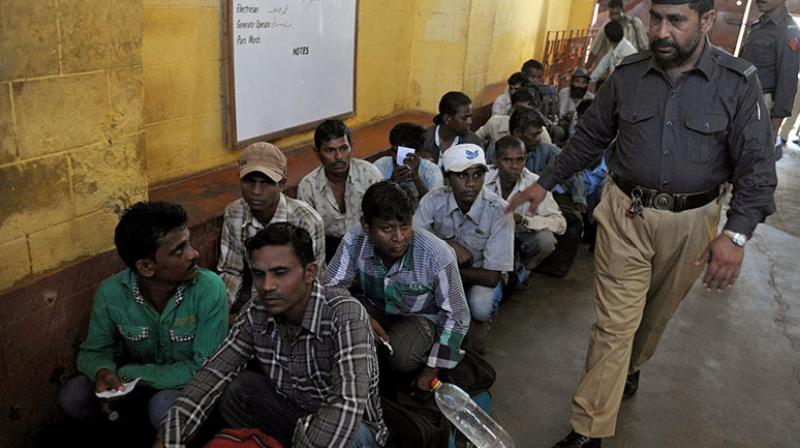 ‘These 578 prisoners are not even any detectives, they are fishermen who had lost their ways,’ says Lok Sabha member Vinod Kumar Sonkar. (Photo: AFP | Representational)

New Delhi: A Lok Sabha member on Friday made a plea to the Centre to make arrangements for 578 Indian prisoners languishing in Pakistani jails to meet their family members.

Speaking during the Zero hour in the Lower House, BJP leader Vinod Kumar Sonkar congratulated Prime Minister Narendra Modi and Foreign Minister Sushma Swaraj for the meeting between Kulbhushan Jadhav and his family after 22 months.

The LS member said as per a report, 578 Indian prisoners were languishing in various jails of Pakistan.

Referring to Jadhav's case, Sonkar said, "When in such a prominent case, such an inhuman treatment is met to the prisoner, what would be the condition of those 578 prisoners?"

"So I would request the Prime Minister and Sushma Swaraj to make adequate arrangements so that the 578 prisoners are allowed to meet their family members, as they are not detectives but fishermen who lost their ways," he said.

47-year-old Jadhav has been sentenced to death by a Pakistani military court, but the execution has been stayed by the International Court of Justice following India's efforts.

Pakistan says Jadhav, an ex-Indian Navy officer, was arrested in Balochistan in March with a fake passport, a charge denied by India, which says he was kidnapped from Iran where he has legitimate business.

Jadhav's mother and wife met him on Monday inside the Pakistan Foreign Office building in Islamabad under unusual circumstances, he was separated from the two women by a glass screen, and they conversed through an intercom in English and Hindi.