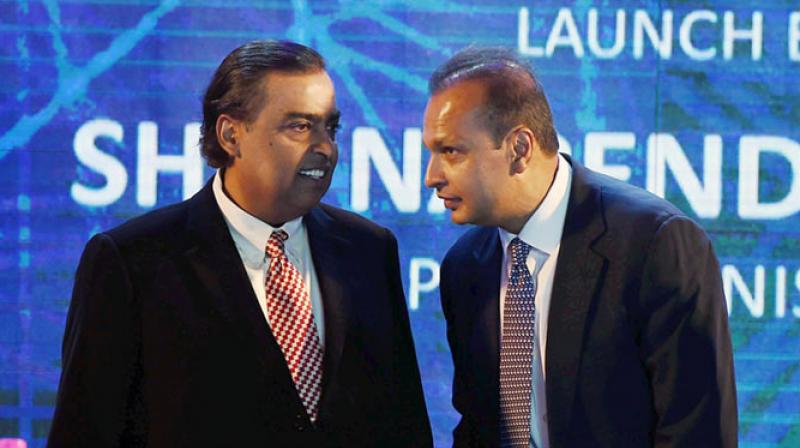 While the two companies did not disclose the deal size, banking sources pegged the transaction value at Rs 24,000-25,000 crore. (Photo: PTI)

While the two companies did not disclose the deal size, banking sources pegged the transaction value at Rs 24,000-25,000 crore.

The announcement comes just two days after Reliance Communications - promoted by Anil Ambani - disclosed a new deal with the lenders under which nearly Rs 40,000 crore will be raised through sale of assets, averting an imminent takeover by the 35 local and foreign banks.

Shares of Reliance Communications surged nearly 35 per cent to Rs. 41.77 on Friday after the telecom operator signed the agreement.

The deal will bring an immediate relief to Reliance Communications (RCom), which is reeling under Rs 45,000 crore debt, and the company hopes to use the entire proceeds to pare its debt.

A statement by Jio -- which has 160 million customers just over a year into 4G operations -- said these assets are strategic in nature and are expected to contribute significantly to its large scale roll out of Wireless and Fiber-to-Home and Enterprise services.

The transaction, subject to approval from lenders and other authorities, is expected to be completed in a phased manner between January and March 2018.

"The RJio deal consideration comprises primarily of cash payment and includes transfer of deferred spectrum instalments payable to the Department of Telecommunication (DoT). The company will utilise the proceeds of the monetisation of this cash deal solely for pre-payment of debt to its lenders," RCom said.

Reliance Jio will acquire all the assets without any previous liabilities attached to them.

"The acquisition is subject to receipt of requisite approvals from Governmental and regulatory authorities, consents from all lenders, release of all encumbrances on the said assets and other conditions precedent. The consideration is payable at completion and is subject to adjustments as specified in the agreement," Jio said.

It further said process to acquire assets of RCom is supervised by an independent group of "distinguished industry experts" and that it emerged as the successful bidder in the two-stage bidding process.

"An asset monetisation process for RCom assets was mandated by the lenders of RCom, who appointed SBI Capital Markets Limited to run the process," the Jio release said.

The parties are bound by confidentiality obligations and will make further disclosures at the appropriate time, Jio said without disclosing the value of the transaction.

The beleaguered RCom was forced to close its mobile voice business a month back as it was not in a position to support the operational expenses.

Earlier this week, RCom announced its exit from the strategic debt restructuring (SDR) and outlined an ambitious revival plan that involved zero write-offs to lenders.

The revival plan had the backing of the Chinese lender which had dragged it to the National Company Law Tribunal for defaulting on USD 1.8 billion loan, and sale of residual spectrum, towers and realty assets, besides a possible minority stake sale to a strategic investor.