Mulayam Singh Yadav had on Wednesday ruled out projecting Akhilesh as the Chief Ministerial candidate in UP polls. 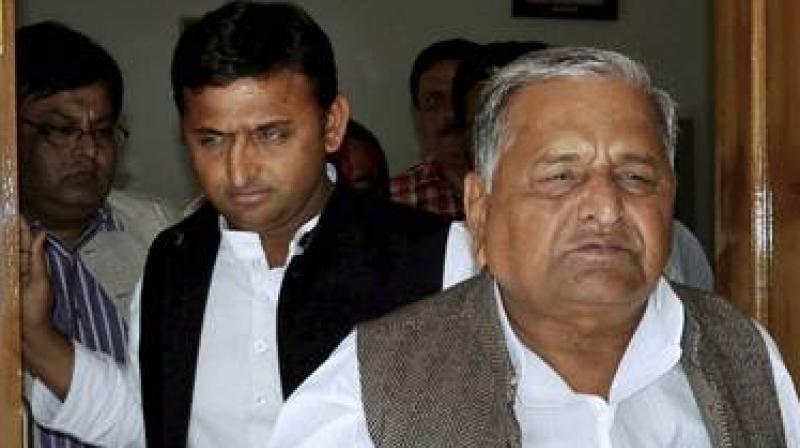 Lucknow: With Mulayam Singh Yadav's public snub to his son in announcement of candidates' list for Uttar Pradesh elections leaving bitterness in the ruling camp, Chief Minister Akhilesh Yadav on Thursday spoke to the SP supremo to convey his displeasure over the choice of names.

The factional feud in the Samajwadi Party was again in the open, a day after Mulayam Singh Yadav declared candidates for 325 of the 403 Assembly seats in Uttar Pradesh and ruled out projecting Akhilesh as the Chief Ministerial candidate.

A clearly upset Akhilesh on Thursday met his supporters at his 5-Kalidas Marg residence in Lucknow and later spoke to his father and party patriarch Mulayam Singh to convey his displeasure over the list of candidates from which names of his close confidants were missing, party sources said.

Hectic political activities began right from the morning with party leaders gathering outside the residences of Akhilesh and Mulayam. A big crowd also assembled outside Shivpal's residence.

Party sources said the Chief Minister, before meeting Mulayam, met legislators and office bearers who do not figure in the list of nominees.

The list, which includes 176 sitting MLAs, announced by Mulayam and Shivpal in the absence of Akhilesh, has left out several pro-Akhilesh ministers, including Ram Govind Chaudhary, Pawan Pandey and Arvind Singh Gope, and does not carry names of over 50 sitting MLAs.

Besides, 10 ministers, including Shivpal, sacked by the chief minister over the past few months have got tickets. These former ministers were in open defiance of Akhilesh and it paid off.

Within hours after release of the list, which clearly bore the stamp of Mulayam and Shivpal, Akhilesh who was away in Bundelkhand yesterday, had said he would take up the choice of candidates with the party chief.

"The list does not include names of certain candidates who are sure to win. I will take it up with the SP chief and tell him that some of them have done really good work and they should be given tickets," an upset Akhilesh had said last night.

In a late night tit-for-tat action, the Chief Minister struck back sacking two Shivpal loyalists -- Surabhi Shukla, vice-chairperson of UP Awas Vikas Parishad and her husband Sandeep Shukla from the post of advisor of Rajkiya Nirman Nigam. Sandeep has been fielded from Sultanpur Sadar seat.

Soon after returning to the state capital from Bundelkhand yesterday, Akhilesh had decided to convene a meeting of party leaders to listen to their "grievances".

The SP supremo also made very clear his differene with Akhilesh on the issue of pre-poll alliance by ruling out any pact for a gathbandhan or maha-gathbandhan and even refused to project a chief ministerial candidate, dealing a serious blow to his son at a time when polls are to be announced very soon.

Out of the 325 names announced by Mulayam, 218 tally with the panel submitted by Akhilesh to the SP chief, but 107 names do not match with the list given by the chief minister, indicating their sharp differences.

The list of candidates announced by Mulayam included those from 176 seats represented by SP in the outgoing Assembly, while 149 candidates were declared from constituencies where the party did not have an MLA.

Candidates for the remaining 78 constituencies are to be announced later leaving a small window for some adjustments to avoid perhaps the final showdown between father-son duo before the elections, a party insider said.