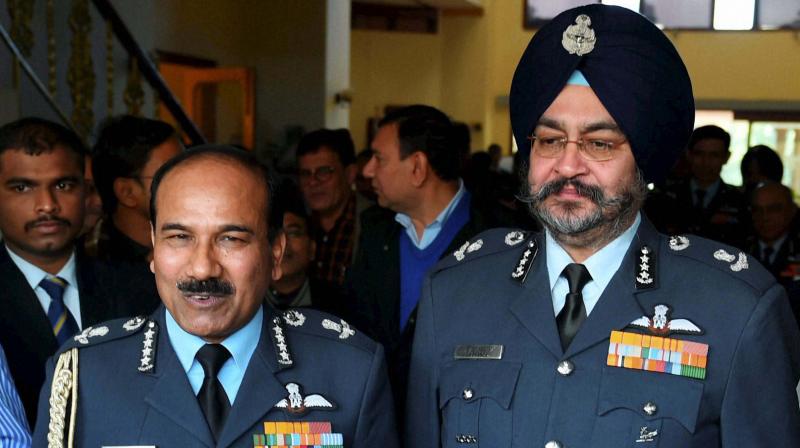 New Delhi: Close on the heels of arrest of former Air Force Chief S.P. Tyagi on charges of alleged corruption in the Agusta Westland VVIP chopper deal, current Air Force head Arup Raha said on Wednesday that multiple agencies were involved in the procurement process and no one can pin the blame on one particular organisation or service.

Mr Tyagi, who was granted bail recently, too has maintained that it was wrong to blame him as all decisions were taken collectively.

The outgoing IAF Chief also made it clear that just 36 Rafale fighter jets would not suffice as India needs about 200-250 more fighters to maintain its combat edge over adversaries. Underlining that the teeth of any air force is the combat fleet, he said that the country needs another production line besides the Tejas.

Praising the role of the Air Force in government's efforts to ease out casg crunch, the IAF chief said that the force transported 610 tonnes of new currency notes after the November 8 demonetisation. So far, IAF aircraft, including C-130s and C-17s, have carried out 35 sorties to transport the cash from four mints across the country, he said.

When asked about corruption charges in defence deals IAF Chief Raha said that despite investigations into the alleged scams over the decades, not much could be achieved by agencies probing them to bring to justice people involved in corrupt practices.

“If these corruption charges are proved, it is bad for the armed forces, or whoever is involved. It is not just the armed forces that are involved in the procurement. There are so many agencies that are involved. Therefore, you cannot pin the blame on one particular organisation or service,” Mr Raha said while talking to the media just days before his retirement December 31.

He also stated that till the time a person is convicted, “I think we should give him due” but once proven guilty, there will be “no sympathy” for him.

While commenting on the appointment of Lt. Gen. Bipin Rawat, who superseded two officers, as the next Army Chief, Mr Raha said there are merits and demerits to the principle of seniority when it comes to selecting service chiefs.

Mr Raha, who happens to be the senior-most of the service chiefs and is also the Chairman, Chief of Staff Committee, claimed that in the past also governments have done selections based on merit or based on whatever consideration they had.

The Air chief said while there will always be people who will speak for it and against it, Mr Raha said once a decision has been, everyone should go along with it.

He also brushed aside China’s reaction on the test firing of long-range nuclear capable missile Agni-V, saying India should carry on with its task of building deterrence capability.

Underlining that India is only building up its deterrence capability, Mr Raha said one should not talk about someone else doing something unless it is prohibited like nuclear proliferation and went on to add that it is ``common knowledge’’ as to what is happening in this region “in terms of collusion, transfer of technology which is forbidden”.

``In order to strike deep into adversary’s heartland” which will act as a deterrent. I think in international diplomacy, normal diplomacy or military diplomacy, these posturing and signalling will always be there. So we should just go about with our task, meet our own requirements, security challenges,” Mr Raha said.

The Air Force chief clarified that India was ``obviously building up’’ capability not to actually fight a conflict as it believes in peace and tranquillity. ``But we also know we have been drawn into conflicts several times in the past. So going by historical experience, we have to build our capability. Capability to deter. How do we deter an adversary who is strong? We have to build up capability in order to strike deep into adversary’s heartland, take on targets effectively which will hurt the adversary,’’ he added.